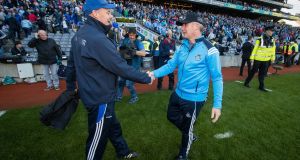 The hope for Diarmuid Connolly is that all the “hard work done in the shadows” will prove sufficient. Dublin face Tyrone in their latest All-Ireland semi-final on August 27th, a day after Connolly’s 12 week suspension for pushing an official will have been served without appeal or complaint.

The problem now is where in the name of Jim Gavin will they put him.

Working purely off seniority, Eric Lowndes would be the man to make way with former footballer of the year Jack McCaffrey returned to wing back.

Slight issue there. Lowndes ran riot in the free moving role, performing with undroppable vigour in this utter decimation of Monaghan on a drab and uninteresting double header in Croke Park.

“Eric has had an exceptional season and is playing very well,” said Gavin. “It was just a different role for Eric. He is very agile, fast, strong player that did very well for us in that game. I thought he did a lot of covering for us as well as some penetrating runs as well. He contributed to a good team performance.”

Monaghan cannot be overly criticised. This Dublin team, in what is becoming a never ending peak where footballers of the year and multi-decorated All Stars must be content with runs off the bench – or not in the case of Kevin McManamon – refused to allow the Farney men any space to threaten an upset of 2012 and Donegal proportions.

But to call it flawless would be to pay about as much attention as the majority of the full house who drifted into the evening at half-time.

No, the double figure wides and, as Gavin stated, 14 points from play will not be sufficient to overcome Tyrone en route to third successive All-Ireland title.

“I think that preparation in the last two weeks was really good. A lot of hard work was done in the shadows. You saw when Monaghan got a run there and showed the capacity to take some great scores if we let them but I thought our team defence was very strong.”

Monaghan arrived with a clear tactical plan to steal a goal from high balls similar to the one Kildare snatched in the Leinster final. It was not on offer here. Not on Philly McMahon’s watch, not with Mick Fitzsimons atoning or Cian O’Sulivan calmly moping up in what looked the fruits of all those shadow hours.

But Gavin added his usual warning: “1-11 from play and a lot of wides in the second half won’t be good enough the next day that’s for sure.

It certainly gives us something to take away to the training ground that’s for sure.

“I think the result is a reflection of the respect we gave to Monaghan. We prepared really well for this game and I thought the players did well in the first half against 13 men behind the ball. We were very controlled and composed, and were deserved leaders at half time.”

Monaghan manager Malachy O’Rourke had no complaints. Some early frees stuck in his caw but he knew what had just transpired.

Super eights be damned. Like Galway and Armagh before them, Monaghan are not up to these dizzy heights.

“I suppose you can’t argue with that after today,” said O’Rourke. “We knew coming up we were going to have to play a lot better than we had played all year. The expectation has gone up in the county as well.

We’ve been here before, we’ve felt we haven’t done ourselves justice here. We knew it was a really tall order against Dublin. But we felt we could put it up to them and that was the most disappointing thing.

“After today, Armagh got well-beaten in the first game too, a number of counties are getting that bit stronger and have pulled ahead this year anyway.”

Gaelic football moves on but many, far too many, are being left behind.