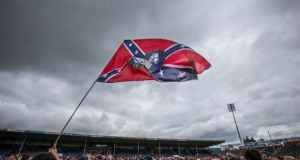 A Confederate flag held by a Cork supporter after the hurling All-Ireland quarter-final in 2015. Photograph: Cathal Noonan/INPHO

Cork GAA officers have condemned the practice by a small number of Cork supporters of flying the Confederate flag at Cork GAA matches.

The officers have urged Cork fans not to bring it to games in the future but to instead show their support by flying simply Cork flags.

Cork County Board chairman Ger Lane told a board meeting on Tuesday night that the County Board Executive condemned the flying of the Confederate flag by a handful of Cork supporters, whether out of ignorance or otherwise, and he urged them to stop the practice.

He said a number of Confederate flags were flown by supporters at the All-Ireland hurling semi-final between Cork and Waterford at Croke Park on Sunday and while it was only a small number among a crowd of 72,000, it was not something Cork GAA wanted to be associated with.

“There is one flag for Cork supporters - the red and white flag with the Cork emblem on it and certainly on behalf of the board and the executive, we ask whoever is involved in flying the Confederate flag at Cork matches to refrain from bringing it into any ground in future,” said Mr Lane.

The flag dates from the Civil War in the United States and represented the pro-slavery Confederate states. It has since been flown by white supremacist groups.

The flying of the flag sparked major controversy on social media in the wake of the killing of a activist Heather Heyer, who was attending a protest in Charlottesville, Virginia, against a rally by right-wing extremists.

Several southern US states removed the flag from official buildings in 2015 after photos emerged of white supremacist Dylann Roof with the flag on a website he set up before shooting dead nine African Americans at a church in Charleston, South Carolina.

The controversy on Leeside about the flying of the flag continued on Tuesday with Independent member of Cork City Council, Cllr Mick Finn, stressing the flag was not being flown by Cork fans as any sort of a political statement.

Cllr Finn told RTÉ that the flying of the Confederate flag had to be seen in context and that anyone going to Cork matches over the years would have seen it along with the Japanese Rising Sun flag, but neither should be seen as any sort of political statement by fans.

“Yes, maybe people’s sensibilities and sensitivities are aroused at the moment about what is going in the United States but I honestly think the flag being flown by Cork supporters is not a political statement and is being done in support of their team and should be seen just as that,” he said.

However Lord Mayor of Cork, Cllr Tony Fitzgerald of Fianna Fáil, said he understands the offence caused to people who see it as a symbol of white supremacy and he believed Cork supporters should abandon the practice.

“I think we should fly just one fly for Cork - the Cork flag with the Cork motto on it and that’s the message I would give to all Cork supporters,” said Cllr Fitzgerald in an interview with RTÉ ahead of the Cork County Board meeting.

Meanwhile, Cork County Councillor Joe Harris of Social Democrats also condemned the appearance of the Confederate flag at Cork matches, saying it should be banned at all Cork games and people educated as to its history and meaning.

“It’s insensitive in the current situation,” Cllr Harris told The Evening Echo. “Our sports are being shown all over the world and it sends out the wrong signal - it’s a very small minority and I think they are aware that it’s controversial.”

He said: “It’s something that needs to be looked and I know Cork fans have a tradition of a lot of different flags but people should be educated on the connotations of the Confederate flag. It’s offensive to a lot of people.”