Niamh Collins: ‘We lost and then we learnt how to win. It is a special team’ 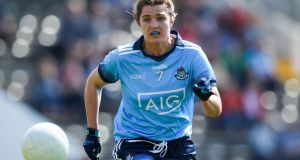 Niamh Collins reckons that she inherited more of her mother Ailish’s netball genes than those of her grand-uncle, the Manchester United great that was Liam Whelan. Photograph: Bryan Keane/Inpho

With a netball international and a Busby Babe in her family tree, Niamh Collins came by her sporting prowess honestly. A pedigree of that quality was always going to give her a chance of excelling with a ball in her hands or at her feet. Or, as it proved, both.

She reckons, though, that she inherited more of her mother Ailish’s netball genes than those of her grand-uncle, the Manchester United great that was Liam Whelan. “My kicking leaves a lot to be desired” she says, “I’m more of a tackle and deal person, the slick stuff happens up the other end of the field.”

That tackling and dealing has served her and Dublin well, though. Since she joined the senior panel in 2014, Collins has known nothing other than a Championship season ending in Croke Park in September, the full back now on the eve of her sixth final in as many years.

Not that the journey has been pain-free. They say you have to lose one to win one. The Dubs had to lose three in that spell before coming good the last two years. You suggest to her, then, that after Cork got the better of them in 2014, 2015 and 2016, she and her team-mates have displayed mighty character since.

“God, that’d be a great line to use in a job interview,” she laughs.

“‘Niamh, can you tell us about some character-building stuff you’ve had to do?’”

“‘Well, let me tell you about the resistance me and my team-mates have had had to build up in our lives’...”.

She struggles to describe how she felt in 2017 when that losing run came to an end with victory over Mayo. “The euphoria really was indescribable. But I remember some of my friends asking me if I felt ecstatic and I said no, I was actually just so relieved. I don’t think I could have lost again. For maybe 24 hours after each of those defeats you’re thinking, ‘Good Lord, why do I do this to myself?’ But January rolls around and you just put it behind you, you go again.”

“It can be very lonely down on that pitch when you’ve lost, staring up at the presentation for three years in a row, but the bond of loss is so strong too. We knew we’d never done ourselves justice, and we were never going to give up trying to put it right. Learning how to win is a skill in itself, learning how not to panic, how to control the game, to be the athlete you know you can be, to not just go inside yourself. That’s the character I think we built. We lost and then we learnt how to win. It is a special team.”

Collins was just 10 back in 2003 when she paid her first visit to Croke Park, and that day ended in heartbreak too. She was there with her Foxrock team-mates (the club later becoming Foxrock-Cabinteely after a merger) to support the Dubs, for whom her current captain Sinead Aherne was a sub. But an injury-time goal from Diane O’Hora stole it for Mayo and denied Dublin their first ever senior title.

“I was devastated, but I was in awe of it all too. I just wanted to play for Dublin, I wanted to play in Croke Park. That’s when I told my parents I wanted to go to Coláiste Íosagáin …. because I’d need to be able to speak Irish if I was ever on the podium as captain accepting the cup for Dublin,” she laughs.

A fateful choice it was too, the school on the Stillorgan Road producing a conveyor belt of Dublin players over the years. Remarkably, five of the six – Collins, Éabha Rutledge, Martha Byrne, Sinéad Goldrick and Aoife Kane – who made up the Dubs’ defence against Cork in the semi-finals are Coláiste Íosagáin ‘old girls’, Olwen Carey (ex-Scoil Maelruain in Tallaght) the only blow-in.

“And we would all have played basketball in school, it was the biggest sport there back then, so that would have developed our handling and tackling skills. But, much as I loved basketball, football became everything from when I was seventeen. I got on to the Dublin under-14 panel and have been involved since. It’s been a big commitment, but we’re here because we want to be, not because we’re earning 50 grand a week, nobody’s making us do it. You want to play football, but representing your county is the next level. I’m so proud to be from Dublin. I’m so proud to play for Dublin. It just makes me so happy.”

Mind you, the first time she played in Croke Park, she wasn’t wearing blue. “It was at half-time in the 2005 men’s All-Ireland final between Kerry and Tyrone, I was one of those little kids, we were selected through our schools. I was wearing a Kerry jersey, but don’t be telling people that.” Of course not.

The 26-year-old, who works as an Operations Analyst with Free Now (formerly MyTaxi), went back to college a year ago to do a Masters in Business Analytics in UCD, having completed a degree in Electrical, Electronic and Communications Engineering there in 2016. A busy spell, then, sprinkled with exams, and a thesis that she submitted just a week ago.

She uses her analytical skills to study her own game and see where she can find improvements, especially if she feels she’s had “a bad day at the office”. They’re useful, too, to run an eye over the opposition, Galway this time around, many of whose players she knows from playing college football with UCD.

“And they’re phenomenal players, such hard workers. I’m not surprised at all to see them in the final, they’ve been knocking on the door all the time,” she says, dismissing the ‘red hot favourite’ tag Dublin will carry in to the game. “There’ve been upsets this year, like Armagh beating Cork, things you mightn’t think could happen, happen. So, we’re just focussed on the job we have to do, if you allow yourself to be distracted by anything else you’ll pay the price.”

Being part of a Dublin three-in-a-row, though, would add yet more distinction to that already impressive sporting family tree. “My mother played netball for Ireland, back in the day, and my Granny’s brother was Liam Whelan,” she says of the Republic of Ireland international who, at just 22, died in the 1958 Munich air disaster.

“My Granny was so proud of him, all the family were. We grew up hearing about him, his legacy certainly lived on even though most of the family would have been very young when he passed away. And we were required to support Manchester United in honour of him,” she laughs. “But yeah, there were always pictures of him around the house, he was never forgotten.”

She’s made fine use of those genes.