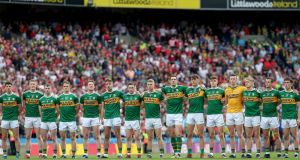 Acquitted himself quite well. Sign-posted vulnerability on re-starts occasionally surfaced - two over the sideline - but percentages similar to Dublin’s, 74 v 76, and overall he connected well. Stretched to take down Paddy Small’s kick to initiate goal move. Never extended on the shot stopping front.

His pace and commitment aren’t always best harnessed. Has had a very testing couple of outings, having to spend unguarded time with Cathal McShane in the semi-final and then Dean Rock, Dublin’s best forward in the draw. Still at the apprentice stage but learning fast.

One of the stars of the drawn match, his reputation as a tough, physical marker in a quicksilver defence was supplemented by a dedicated man marking job on FOTY candidate Paul Mannion, limiting him to two early points and keeping him out of scoring zone.

Kerry’s go-to man marker got the job of tracking Con O’Callaghan, which on one level didn’t go well but direct damage restricted to a point. Claustrophobic defence set-up a key team strength, but not optimal for his game. Diced with dismissal after 48th-minute yellow card.

After a difficult semi-final playing the sweeper role like an abandoned railway station, he got back to what he does best, tidying up in an integrated defence and getting forward when appropriate. Took a quality save from Cluxton to keep out his goal shot.

A player who has really taken his chance as a fixture at six. A strong athlete, he was disciplined in his job on Ciarán Kilkenny, never allowing him settle into the conductor role and getting forward for a fine point in the second half.

In the midst of all the tactical nuances of taming the Dublin attack, he did a good, straightforward job on Niall Scully, curbing the pacey forward. Had the focus to subdue his natural wing back instincts to what was required.

Consistency of recent performances have marked his best season in five years. Dominant centrefielder in draw, he ran out of steam a bit at the very end but showed industry around the field, some magnificent catches and top possession count in the middle sector.

Yet again, he proved kryptonite to Brian Fenton. Despite an injury-disrupted season, he played virtually the entire match, taking great catches - two in quick succession off the Cluxton kick-out - and working his socks off, as the team strategy successfully disrupted the champions’ engine room.

Thought to be under pressure after the confusion created by McCaffrey’s sonic boom and the challenge of slotting a defender into wing forward. Speculation that the captaincy isn’t helping cope with these unorthodox demands but he has struggled to hit his best form.

Best display of memorable season by one of Kerry’s two princes. His place kicking technique is a lesson in form and accuracy and was proof against hyper-pressure of first senior All-Ireland final. Also kicked three from play and gave a defiant, physical account of himself.

Didn’t quite stamp his FOTY credentials on the draw but was still very effective and nearly got through for an early goal and later he had a very plausible shout at a penalty. His conjectured picking up of McCaffrey would be a tactical upheaval.

Kerry’s other wunderkind had a mixed afternoon but only by his standards. Instrumental in Dublin being reduced to 14, he posed constant threat and even if his shooting was slightly askew, the point off Fitzsimons was a nimble masterclass for a physically powerful player.

Most visible in not scoring the early penalty and unlucky that his blast of another shot was blocked on the line but he gave a fine display as creator, including the telling ball that led to Clifford being fouled for the penalty. Makes things happen.

Integral to tactic of loading the middle - effectively as a third centrefielder - his early work rate was outstanding: two turnovers in the first 10 minutes, one leading to a score. Replaced by his brother at the break to enhance the cutting edge up front.

OTHER PLAYERS USED THIS CHAMPIONSHIP