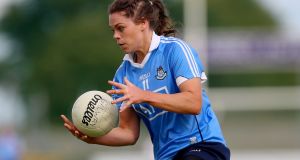 When Mick Bohan and Tim Rabbitt named their panels for Sunday’s TG4 All Ireland final, the contrast in the experience and senior success enjoyed by the respective line-ups couldn’t have been more striking. Between them, the Dublin panel has 42 winners’ medals, Galway’s has none.

That, then, is a measure of the challenge that faces the Connacht champions when they take on the three-in-a-row seeking Dubs who will be playing in their sixth successive final. Galway, meanwhile, are back on the main stage for the first time since 2005, their semi-final victory over Mayo the Croke Park debut for every one of their players.

Bohan expressed some irritation in the build-up at talk of his Dublin team now dominating the women’s game, and the possibility of that supremacy extending for some time yet, but should they complete that three-in-a-row, he’ll have to contend with plenty more of that chat.

While the reigning champions might still be some distance from emulating Cork’s remarkable 11 titles in 12 years, between 2005 and 2016, they have the look of a team more than capable of adding to the county’s modest enough return of three senior successes. Indeed, the starting XV named by Bohan reads like an All Star selection, Sinead Aherne again captaining the side in what will be her ninth All Ireland final.

Noelle Healy, the 2017 Player of the Year, is restored to full forward after being replaced by teenager Niamh Hetherton for the semi-final victory over Cork, with the only other change an enforced one – corner forward Nicole Owens needing surgery on the knee injury that forced her out of the semi-final after just four minutes. She is replaced by Cuala teenager Jennifer Dunne in an attack that has amassed 19 goals and 72 points from just five Championship games, compared to Galway’s total of 10-68 from six outings. Between them, Aherne, Niamh McEvoy and Lyndsey Davey alone have matched that goal tally. How the Galway defence stands up to that threat is likely to be the game’s chief determiner.

But it’s a Galway side that has experienced plenty of success at underage level and after an encouraging league campaign that saw them reach the division one final, where they lost to Cork, there should be no little confidence among the players. Dublin beat them by four points when they last met in March, but it’s doubtful either camp will attach much significance to that result.

Rabbitt has kept faith with the team that saw off Mayo, the side captained by Tracey Leonard, top scorer in the campaign so far with 3-26, who forms the frontline of an attack completed by her cousin Róisín Leonard, who got the winning point in the semi-final, and Sarah Conneally. Behind them, Olivia Divilly and Megan Glynn have impressed all season and their performances will be key to the effort to trouble a Dublin defence with the vastly experienced Niamh Collins and Sinead Goldrick at its spine. Louise Ward and Áine McDonagh’s midfield dual with Siobhán McGrath and Lauren Magee will be no less crucial to the outcome,

Galway, then, may well have to find their inner Goliath if they are to add the county’s sole senior success, which came back in 2004, but Dublin have endured enough heartache on All-Ireland final day over the years to be more than wary of the fate that befell David.

All three games will be shown live by TG4.