All-Ireland Final replay: Donie Buckley and the art of defending against Dublin 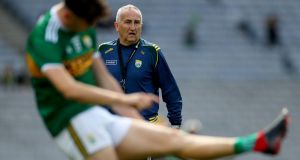 Kerry selector Donie Buckley: 'He’d always talk about initial contact – when you go into the tackle you should be turning the player or slowing him down.' Photograph: James Crombie/Inpho

The standout achievements by Kerry in the drawn All-Ireland final was the tactical clamp that prevented Dublin flooding into their customary scoring zone and also the success of the match-ups that led to so many of the champions’ big names having a below-par day.

The defensive improvement in Kerry had been obvious in the league, at least up until the final defeat by Mayo. In the regulation matches their concession rate had dramatically dropped from 10-98 in 2018 to 4-80 – more than five points a match fewer.

This radical improvement had been obscured by reservations expressed about the county’s lack of obvious man-markers or a defensive system. The new management of Peter Keane, Tommy Griffin and James Foley might have been new to senior county football but Donie Buckley wasn’t. If Keane had reservations about being prescribed a coach, he didn’t let them show as Kerry made their best start to a league season in years, winning the first five fixtures.

Buckley could generate that impact. The story is told that when he joined up with new Mayo manager Stephen Rochford in 2016, the first match in the league had been a nine-point thumping in Cork. Within a week and on the back of one training session, Mayo with 11 players who hadn’t featured in the previous year’s championship tussled out a much improved two-point defeat by Dublin.

His league arrivals tend to be late as he spends winter months in Florida, where he has a detailed interest in American sports. Before the 2010 Munster final in which Limerick ran Kerry close, 1-14 to 1-17, he took Stephen Lucey and John Galvin to a basketball court.

Galvin, an accomplished basketballer, guided Lucey through a series of Buckley’s drills to prepare him to take on Kieran Donaghy, who he kept scoreless. “It gave Stephen great confidence – not that he’d be short of it,” says former Limerick team-mate Stephen Lavin.

The coach cut his teeth in Clare and then Limerick from 2008-10 before taking up coaching duties with his own county during the last two years of Jack O’Connor’s management.

Having taken up a position with James Horan in Mayo in 2013, Buckley became an immediate focus of attention with the artful coaching of Mayo’s forwards forging a powerful weapon in turnover tackles on opposing defences.

As an innovator he left a deep imprint on those with whom he worked, including former Limerick wing-back Lavin.

“We played Clare in 2006 in the Gaelic Grounds, and they should have beaten us but we pipped them. They were very well coached. I didn’t know Donie was involved with them, and my first experience of him was when he came in to do a training session in the club [Adare] one night and I swear to God it was like nothing we’d ever experienced.

“From the warm-up to the final whistle was non-stop, and after the warm-up we were wrecked. It was intense, there was purpose to everything, you could see the reason for everything and this is a club training session. When I heard that Mickey Ned O’Sullivan [former Kerry captain and Limerick manager] had got him in, I knew we were on to a winner.”

Maurice Horan managed Limerick and previously had been a selector with O’Sullivan, working with Buckley.

“What he does is to empower players,” he says. “They believe that they have been prepared not just to counter the opposition but to play well themselves. First of all they’ll be ready physically and they’ll know that. Secondly, he’s very modern and doesn’t just speak in traditional terms but rather as very specific, technical instruction.

“Any of the Limerick players – to a man – would say that they benefited from having him there. He would always give them an insight, which would unlock a specific issue, something they previously didn’t know.”

In an interview with the Kerryman, former Mayo player Alan Dillon – who had been the instrument of one of the county’s great tactical coups in 2016, against Tyrone when his deep positioning and kick-passing into the forwards greatly inhibited the Ulster champions’ counter-attacking strategy – said that Buckley’s fingerprints were all over Kerry’s tightened defence.

“Donie brought the art of dividing the pitch into different zones,” he told Joe Ó Muircheartaigh. “The pitch is corridors – you’d have four or five zones. If the ball was over in one side of the pitch, the chance of the defender or the attacker switching the ball across four lanes is minimal so you cover the nearest three lanes so you’re always compact and always tight.

“The mindset that you don’t allow a player up the channel is crucially important. He’d always talk about initial contact – when you go into the tackle you should be turning the player or slowing him down. That was very much his thought process.”

For Lavin, even though his experience with the same coach is more distant, certain fundamentals are recognisable.

“It was 10 years ago, and I don’t know much about him in Kerry. But I do know that he must be twice the coach he was back then because he’s always looking for the next step, the best way of doing something and getting the message across.

“He did everything and the detail he went into – one of the big things he excelled at was the match-ups. We played Meath but Donie had the match-ups specifically down. He knew Meath inside out and knew exactly who to put on who.

“Look at the drawn match two weeks ago. Kerry got the match-ups really spot-on with the exception of Jack McCaffrey, but they nullified so many of Dublin’s key players and he always excelled at that.”

It will be Buckley’s eighth All-Ireland final against Dublin opposition. He won the first, scoring a late goal to win the All-Ireland club title for Castleisland against St Vincent’s, but the six this decade have been unyielding. However, the last four have included two one-point defeats and two draws.