Naomh Conaill’s physical game too much for Clontibret admits McEntee 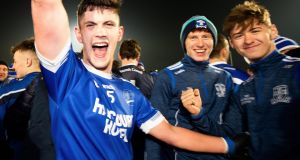 Naomh Conaill’s Ethan O’Donnell celebrates with team-mates after the victory over Clontibret in the AIB Ulster SFC semi-final at Healy Park in Omagh. Photograph: Evan Logan/Inpho

Clontibret manager John McEntee admitted his side came off second best in the physical stakes as well as the scoreboard after the Monaghan champions went down to Donegal’s Naomh Conaill in the semi-finals of the Ulster club football championships at Healy Park in Omagh on Saturday night.

“We just met a better team on the day,” said McEntee. “They were stronger and more physical in the tackle and they stuck very well to their game plan of coming from deep. But at the same time we’ve had a great year but we just didn’t have enough to keep the year going”.

The Donegal champions were never headed in the entire contest and recovered from losing full back AJ Gallagher to a black card after 22 minutes but they adjusted well.

With Eoghan McGettigan pulling the strings up front they opened a lead of five points going into the second quarter. Conor McManus kept Clontibret in touch from frees and at half-time the Glenties side led 0-7 to 0-3.

On the resumption Ciarán Thompson put the Donegal side five in front, but Clontibret then pulled back three points in quick succession, two from frees by McManus, and one by Francis Hughes, to reduce the margin to two.

That was as good as it got for the Monaghan champions as Naomh Conaill picked up the pace again to add points by Ciarán Thompson and Eoghan McGettigan who caused Clontibret all sorts of problems throughout.

An exchange of points between Dessie Mone and Eoghan McGettigan left four between them entering the final 10 minutes with Ciarán Thompson then converting a free to stretch the lead to five with six minutes of normal time remaining.

Clontibret now needed a goal if they were to have any chance of salvaging the situation but all they could manage was two late points, McManus from a free and substitute Darragh Hughes with his first touch to leave three between them at the finish.

Naomh Conaill manager Martin Regan was delighted with how his side had performed and said it reflected the “whole spirit that was in the club”.

“Everybody has backed this team right from the start and we get great support and the boys respond to that. We got off to a great start and we might have had an early goal, but even when Clontibret came back at us and got it down to two points early in the second half, the boys responded as we knew they would. So we will just enjoy the next two weeks now and see how the final goes.”