‘In this controversy they have taken a vow of the Trappist monk. Sorry lads, it won’t wash’ 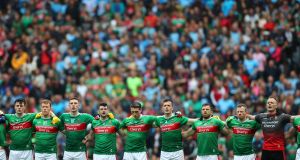 Mayo players line up for the national anthem ahead of this year’s All-Ireland SFC semi-final against Dublin at Croke Park. Photograph: James Crombie/Inpho

Now starting to resemble Brexit, the current Mayo controversy is panning out on predictable lines. The County Board v The Foundation/Tim O’Leary. Like Muhammad Ali and the rope-a-dope tactics, where back on the ropes, he absorbed the opponents best shots, waiting for the chink in the armour to unleash the KO punch, the county board certainly are taking the hits but stubbornly refusing to fall. Or land that knockout punch.

Mayo, once described as “The Dark County” is living up to its name. Much of this battle has been going on, believe it or believe it not, since the 1940s. Names change, personnel come and go but the culture of the county’s GAA executive are as deep rooted as the counties colours. In late 1947 Mayo travelled to play Kerry in that season’s league. Unable to field a full team, Finn Mongey, the then county secretary, was forced to make up the numbers.

The team had enough. They penned the famous letter that went public, challenging the county board and for seven years that team made Mayo’s history.

The Albatross they left behind haunts the county since. Between 1947-1955 that team won five Connacht titles, two All-Irelands and two National Leagues, bequeathing Seán Flanagan and Tom Langan to the GAA Team of The Millennium. Every Mayo team since has faltered in their footsteps. It is accurate to say that counties that have controversy-free executives tend to be the counties that won the trophies. I refer to Dublin, Kerry and Kilkenny as examples. For my seven decades, six actively following Mayo, the weak link was always the executive.

Be it fixtures regarding the county; be it controversy from the four minutes shaved off normal time v Cavan in 1948; presiding over a county from 1955 to 1985 with a return of five Connacht titles; unable to unmask John Finn’s assailant who broke his jaw in 1985; losing Dan O’Neill, Séamus O’Donnell and John Nallen from the league winning side of 1955. O’Neill and O’Donnell had their All-Ireland medals two years later via Louth 1957 and Nallen played for Galway in the 1959 All-Ireland final.

In recent years Mayo travelled to London via Castlebar, Galway airport, Waterford airport, Southend and finally Ruislip, where London almost derailed James Horan first time out. Agreeing to play Kerry in Limerick in 2014 showed the followers a perceived weakness and many followers blame all this on the county’s indebtedness on MacHale Park, where the figures are eye watering and unexplained. Croke Park took over the debt but Mayo clubs are levied to within the price of a new ball to bail the county out. The centre couldn’t hold.

The Foundation has become the vehicle, or the prism, that most people are viewing the current controversy through. Ironically, not many Mayo-based voices have stood up and spoken. Fear runs deep within the county. Old alliances and favours are being called in. The media, as in Eastern Bloc countries or North Korea, have been issued with all manner of draconian restrictions. That folks is bad karma, nobody feels good with behind doors secret meetings. Bill Clinton made reference to “it’s the economy stupid”, in Mayo we need reminding it’s “the GAA stupid”.

We have a comparative, also spread over a similar span of the 1950/51 heroes. The “best team never to win and All-Ireland” – Mayo 2011-2019 . They too won five Connacht titles, one national league but blew/lost four finals. They like the 1948 men also flexed their not inconsiderable power. Two managerial teams fell to that power. The Pat Holmes/Noel Connolly axis went down in flames. So too did Stephen Rochford. In the former the players were very vocal. In the latter the players let their silence finish Rochford off, this after he left them two cumulative points short in over 210 minutes of All-Ireland finals.

So they do have an opinion. They do have a goal. They do have power, overt and covert. But in this controversy they have taken a vow of the Trappist monk. Sorry lads, it won’t wash. The Foundation/O’Leary has poured the guts of €500,000 into Mayo football for their benefit. Much of that money has been from that person’s own personal account. Mayo the county has benefited, Mayo the players have benefited. Mayo the followers would like to hear from the group that is the visible representatives of the county.

Standing back and awaiting to see whom is the last man standing shouldn’t be an option. The right to remain silent in executive decisions was dissolved when the players orchestrated the removal of Holmes/Connolly and the silence regarding Rochford.

If they felt that they had skin in the game then, sure as hell they have skin in this game. And maybe that’s the reason that the men of 1950-51 landed those two All-Irelands. They called out what they perceived as impediments. We await and watch.

John Cuffe is a life-long Mayo supporter, established contributor on county GAA matters to the Western People and author of ‘Inside the Monkey House – My time as an Irish prison officer' published by Collins Press.