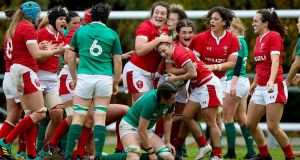 Ireland’s search for a maiden November Women’s International victory continues after they suffered an agonising defeat to Wales in the UCD Bowl on Sunday afternoon.

Adam Griggs’ charges looked set to hold out for just their second win of 2019 when Ellen Murphy knocked over a close-range penalty on 74 minutes. However, there was enough time for Wales’ replacement scrumhalf Keira Bevan to strike a decisive blow deep into second-half stoppage-time.

Following a disappointing Six Nations campaign, Ireland were aiming to end 2019 on a high. Instead of opting for the posts off a succession of early penalties, outhalf Murphy kicked to touch in a bid to create a set-piece platform.

While this didn’t paid dividends, the hosts ultimately broke the deadlock in the 19th minute. Fullback Eimear Considine embarked on a weaving run through the heart of the Welsh defence and was hauled down just shy of the whitewash.

The ball was quickly recycled to the left of the posts, where Cameroon-born prop Linda Djougang was on hand to power over for her first international try. Murphy’s subsequent conversion was wide of the mark, but Ireland had established an encouraging platform on the first-quarter mark.

Nevertheless, Wales started to find their feet as the action progressed. Thanks to some fine tactical kicking from Osprey’s Elinor Snowsill, they kept their Celtic rivals on the back-foot for an extended spell.

However, they lacked a cutting edge in attack and disciplined Irish defence forced a series of turnovers deep inside their own ‘22’.

Whereas the opening period struggled to catch fire, a pulsating start to the second half brought much-needed life to the proceedings. Capitalising on impressive build-up play by Considine and Murphy, Skibbereen’s Enya Breen found herself in space on the left-flank.

She feigned a pass out wide to Beibhinn Parsons and evaded a despairing Kayleigh Powell tackle on her way to grabbing Ireland’s second unconverted score of the contest. Wales refused to give in, though, and immediately responded at the opposite end with a coolly-struck Robyn Wilkins penalty.

Moving into the final-quarter, lively replacement Sioned Harries crashed over via a lineout move and Wilkins’ bonus strike brought her side back on level terms. Murphy’s routine place-kick looked set to hand Ireland a morale-boosting success only for Bevan to snatch the spoils with a last-gasp finish off an attacking maul.

Athletics Ireland confirm seven sessions for National Championships 17:23
Trump prefers Jordan to James because ‘he wasn’t political’ 16:45
Mark Selby books semi-final spot after crisis of confidence 13:09
Galgorm Castle resort could rescue 2020 Irish Open 11:25
Iain Henderson out for up to 10 weeks after hip surgery 10:26
Crossword Get access to over 6,000 interactive crosswords