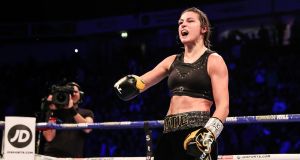 Katie Taylor after her victory over Christina Linardatou at the Manchester Arena. Photograph: Gary Carr/Inpho

Amid the rancour of a defeated opponent, Katie Taylor’s collection of a super lightweight belt to add to the four she owns at lightweight marked her out as something more than sharing a stage with Carl Frampton and Steve Collins as Ireland’s only two-weight world champions.

In the most perceptive and resourceful bout of her three years as a professional, Taylor set out her stall as a more complex boxer and that may give future opponents pause to think. The 2016 model is far from what the 2019 has become and what the 2020 will be as Taylor moved and thought her way around the Manchester Arena to build a points decision over the dangerous puncher Christina Linardatou.

It was those elusive tactics that drew the ire of Linardatou after Taylor was named the unanimous winner 96-94, 97-93, 97-93. The 31-year-old had come to fight the version of Taylor that had dangerously chose to slug it out with Delfine Persoon at Madison Square Garden in June, almost to her cost.

Instead what the Athens-based fighter and her American manager Brian Cohen got was a more pragmatically cautious Taylor, declining for the first time to give in to her natural instincts and go toe to toe. Taylor stuck rigidly to a strategy that served her best interests. And that is a sea change in her thinking and performance. In moving up a weight division needs must.

Also saving the trash talk until after the bout, Linardatou was equally as spiky as her manager.

“I am afraid of nobody and I am not fake because I am here and I am real,” she said existentially. “I mean fake is that she is not undisputed. She didn’t beat me, didn’t beat Persoon.”

Non-plussed Taylor, manager Brian Peters and promoter Eddie Hearn had, at that stage, removed themselves from the room but not before Hearn set Taylor up for a career-defining 2020, her next fight sketched in for March on the week before St Patrick’s Day.

“There’s a women’s day or international women’s day in America on March 7th and they’d like to run an all female card, with Katie Taylor headlining for the first time,” said Hearn. The names Amanda Serrano, Cecila Braekhus and Persoon just kept coming up, with Hearn predicting Taylor would also head a non- American pay-per-view show with Sky Sports next year.

Serrano and Persoon will be made at the lower 135lb limits. Braekhus trades at 147lb, and whatever agreement they might make on a catch weight, Taylor will not be going up that high. Even at Saturday’s 140lb, there was a discernible difference.

“It was only five pounds I guess but I certainly felt her power,” said Taylor. “I think she’s an unusually strong fighter for her weight division, and we knew coming into the fight that she was the best 140 pounder.

“It was important for me to bank the early rounds and be smart, and stay like that throughout the whole fight. I have to be consciously disciplined sometimes.

“It’s very, very tempting to just stand there and fight than move your legs. I knew that’s the way to beat her. That’s what we were talking about for the last few months – that I have to be disciplined.”

Taylor’s swollen right eye from a Linardatou left in the second round was proof that she was a hitter. The Dominican Republic-born boxer would have been marked up for aggression and go forward, but too often her bombs were missing and pulling her off balance. Her left was constantly in Taylor’s face but the clean power punches didn’t land.

Taylor jabbed and fought at a distance, and when Linardatou put on her full press, Taylor spun out into clean air. The 33-year-old had hand speed and footwork to Linardatou’s fearless cornering tactics, and while one was chasing the other was building a score.

Taylor shipped a big left in the eighth round which rocked her but it arrived moments before the bell. By then the energy levels of Linardatou had dipped as Taylor finished the bout pivoting and rolling away from a frustrated opponent who wanted to brawl, all the while the winner flicking out shots and short combinations.

For Taylor’s trainer Ross Enamait this might have been a hallelujah moment.

“I didn’t get dragged into a fight this time,” said a smiling Taylor, her puffed right eye closing and a new WBO super lightweight belt by her side.