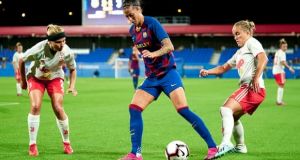 Barcelona’s Jenni Hermoso, the fourth-highest goalscorer for Spain, was one of the 189 representatives who voted for strike action. Photograph: Quality Sport Images/Getty Images

The announcement that footballers in Spain’s top division will begin an indefinite strike on the weekend of November 16th-17th is hugely significant in the battle for a global professional women’s game.

There have been strikes and player protests before but these have often revolved around the conditions and pay of the national team.

In 2017 Republic of Ireland players threatened action after going public on having to change in airport toilets and sharing tracksuits.

The same year Denmark players forfeited a World Cup qualifier against the Netherlands while in a pay dispute with their football association – a decision which ultimately cost them a place in France after they finished second in the group and went into tough play-offs for the final European place.

Members of the Nigeria national team held a sit-in at their hotel after this year’s World Cup exit to demand outstanding expenses be paid – they did the same after winning the Afcon in 2004 and again in Cameroon in 2016.

The US Women’s National Team are suing US Soccer in their fight for equal pay.

There are many other examples. But there are not examples, at least in the modern era, of players across an entire league threatening action. It marks a huge change in attitude.

Previously female footballers were sort of willing to shut up, to be grateful for the right to play. The demands to be aptly compensated for representing your country felt a just cause, but this did not translate to the game at club level.

What makes this threatened action significantis that it is about the day-to-day, the right to a decent standard of living and an unwillingness to go on accepting that professional standards be demanded of players without the contracts and pay to reflect it.

Tellingly, it is not a handful of players threatening to strike; 189 representatives voted 93 per cent in favour of taking action across the league’s 16 clubs.

The top contracted players are standing shoulder to shoulder with the poorest. Six players from the champions, Atlético Madrid, attended the meeting which voted so overwhelmingly for action. Four turned out from Barcelona, including the Spanish national team’s fourth-highest goalscorer, Jenni Hermoso. They are symbolically backing the push for a collective bargaining agreement across the league, which would include as a minimum €16,000 annually for a 40-hour working week, €12,000 for a part-time 30-hour week, maternity leave and paid time off.

These wages are low. They may be higher than Spain’s minimum wage of approximately €12,600 a year for 2019, but they are significantly lower than the average wage of Spanish workers which is €23,000, according to the country’s office of national statistics.

There may be a fear that clubs will struggle to pay, in particular the four teams without the backing of a men’s club – Madrid CFF, Sporting de Huelva, Logroño and UDG Tenerife – but serious questions have to be asked about the commitment of those clubs and the league if that is the case. Clubs receive €350,000 a season from the federation (a requirement as a government organisation, not out of the goodness of their hearts) and they are being offered €500,000 by the league for their TV rights. If the welfare and support of players is not the number one priority and is not what sustainability is being built around, then what is the focus?

For the 12 teams backed by wealthy men’s clubs the excuses are even more moot.

That clubs are digging in and resistant to the most minimal of employment rights for their players ispretty galling.

Strike action is always a last resort. That it has taken 18 meetings across 13 months is testament to this, but now the players have had enough.

Whether we reach November 16th at an impasse remains to be seen. The threat of industrial action can be very powerful; whereas clubs are happy to let talks rumble on in the background, strike action hits them where it hurts: in their pockets. TV rights and sponsorship deals depend on games happening. It is also extremely important that a club maintains a good image for invested parties – funnily enough, striking female footballers is not a good look.

Women’s football is entering a new era of professionalism and mass audiences and players are feeling empowered by it. Spain’s players are leading the way, but we can be sure they will not be the last to collectively organise on this scale. – Guardian