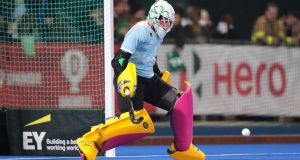 Ireland’s Ayeisha McFerran was the hero as her team qualified for the 2020 Olympics. Photograph: Morgan Treacy/Inpho

If 2018 was a magical year for the Irish women’s hockey team, 2019 might just have surpassed it. All that talk about the World Cup being but a stepping stone to Tokyo? Well, Tokyo, here come the history-makers: the first women’s hockey team from this island to qualify for the Olympic Games.

And they did so in a nerve-shredding climax to their Olympic qualifier against Canada, the tie going to a shoot-out after the teams played out their second scoreless draw in two nights. If the game itself lacked drama, the crowd of 6,137 in Donnybrook were more than compensated by what followed.

A week after the men’s team lost in the cruellest and most controversial of circumstances to Canada in their Olympic qualifier in Vancouver, the women looked set to have their dreams of sealing a place in Tokyo crushed by the same nation when they trailed 3-1 in the shoot-out. By now, Irish hockey reckoned it would be seeing maple leaves in its nightmares.

But with the steeliest of guts and the most immense of character, Ireland dragged themselves back in to it, Ayeisha McFerran, just as she did in those World Cup shoot-outs, producing some brilliantly composed goalkeeping, not least when she faced Shanlee Johnston - if Johnston had converted, then it was Canada who would have been Tokyo bound.

While Nicci Daly tucked away her effort, both Gillian Pinder and Roisin Upton failed to convert theirs, so when Sara McManus fired home a stoke, awarded after McFerran had fouled Kate Wright when she attempted to round the goalkeeper, that had Ireland on the verge of defeat.

But that was to be the end of Canada’s shoot-out scoring, McFerran thwarting all their remaining efforts while Bethany Barr, Chloe Watkins and Roisin Upton calmly put away theirs. Watkins’ score forced the drama in to sudden death, Upton putting Ireland 4-3 up. And that drama intensified when Canada referred their final miss to the video umpire, hoping she would spot a foul by McFerran, so while the Irish players and their supporters initially celebrated, a hush fell over the ground as the decision was checked.

And then came the reply from the umpire, it was music to Irish ears: “No clear reason to change your decision.” The place erupted.

“I’m just so incredibly proud of this bunch of players,” said captain Katie Mullan. “We have worked so hard, some of us have put in 10, 12 years, and it’s also for all the players that have gone before us. All those who committed so much of their lives to international hockey and never made it to an Olympics. We are representing them. I am so delighted.”

Tyrone woman Shirley McCay, who won her 301st cap for Ireland on Sunday evening, had planned on retiring after the World Cup, but she had so much belief in this side’s potential she decided to give it one more year. Now, after helping them achieve their Olympic dream, she’ll have to give it another.

After all the heartache, after coming within 60 minutes of qualifying for the last two Olympics only to fall at the final hurdle, it’s mission accomplished. It’s some story.