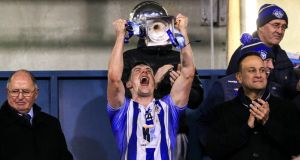 Brilliant November sunshine gave way to a cold winter’s evening in Parnell Park on Sunday with hot favourites Ballyboden confirming their status and surprise challengers Thomas Davis probably freezing a little bit in their first Dublin final in 28 years after a great season had seen them take some trophy scalps.

The winners led virtually from gun to tape, once they took the lead in the sixth minute with a Colm Basquel free. After the 23rd minute, the margin never shrank below three and didn’t really look like doing so. Their greater experience and sharper attack were the clear differences in a contest that at times lacked urgency, as it proceeded down its predicted path.

A pleased Ballyboden manager, former Kildare All Star Anthony Rainbow, said that they prepared to make sure that they wouldn’t be the next notch on the outsiders’ belt.

“They’re a well-drilled side and Paul Kelly has done a fantastic job with them. So definitely we weren’t complacent. We were taking them very seriously. We did a lot of work during the week in terms of the tactical side of it: on their kick-outs and our own kick-outs, and our own play as well.

For his Davis counterpart Paul Kelly, the match had got away from them a little in the early stages and that the 0-2 to 0-7 half-time deficit had been a major challenge.

“Look, we probably lacked a bit of composure in the first half. A few final balls didn’t go the way we wanted, a few bad passes, a few mishandlings – just to get in a couple of points nearer. We thought we would be in it going down the other end.

“We got off to a decent start in the second half. We were looking for that goal that we’ve been getting in the last few weeks – it just wasn’t coming and ultimately we were never going to pare back that lead without getting a goal.”

They weren’t helped when the manager’s son Oisín had to leave injured after just eight minutes and their best chance at goal had come in the 11th minute when Ciarán Farrelly won a ball that skidded through to him in front of goal from a free kick but he never managed under pressure to get sufficient connection on his shot.

Davis’s were playing deep and hoping to threaten on the counter-attack but when they broke they struggled to create scoring chances, often loading the attacks to one side and failing to use the width of the field.

Ballyboden were more economical even if they dropped four shots short in the first half. Ryan Basquel kicked three frees and one from play but his brother Colm didn’t hit the incandescent form of recent matches although he managed to create a goal chance out of nothing when winning the break from a hop ball in the 24th minute. Robbie Crilly in the Davis goal, kept it out.

There were also scores from the hard working Darren O’Reilly and veteran centrefielder Declan O’Mahony, who hit a great long-range point. Overall though the best attacking display came from Dublin under-20 Ross McGarry, who kicked four from play.

“They’re a very good team, very defensive – scores are hard-earned,” he said afterwards. “I was right place, right time for a few of them. Delighted I could put them over.”

Rainbow emphasised the point that his attack wasn’t just about the Basquels, both of whom played for Dublin in this year’s league.

“They’re all scoring players and not only that but when we don’t have the ball their work-rate is very, very high.”After the break, Davis’s switched Eoin Kirby on to the frees and he kicked four of them but Ballyboden, pushing up  more aggressively on the re-starts, kept them at arm’s length. Dublin centrefielder Michael Macauley was withdrawn after 50 minutes because of concussion protocols but appeared to be alright afterwards.

He, O’Mahony, Conal Keaney and Darragh Nelson now have three county medals. The club’s previous win, four years ago was the springboard to an All-Ireland title in 2016. The national comeback trail starts in a week’s time when they begin their Leinster championship with an away fixture against Louth champions Newtown Blues.