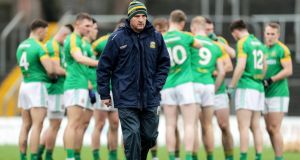 Andy McEntee’s side need to beat Mayo in Navan on Sunday after losing their opening two games in the league. Photograph: Laszlo Geczo/Inpho

Two games in and already Meath are looking like plankton in Division One. Only London have scored less than them across the four leagues. Kerry have actually conceded more but have scored twice as much. They’re nailed to the bottom of the table and they still have to play Dublin, Kerry and Mayo, none of whom have ever been relegated from the top division. All indications are that it’s going to be a short spring and it’s going to feel very long.

This is not unusual. These days, at least one of the promoted teams generally gets this treatment in Division One as they struggle to stay in touch with an ever-strengthening core of seasoned elite teams at the top. In fact, the fate of promoted teams has become one of the cleanest illustrations of the divide between the best teams and the rest, particularly over the past five years.

Consider the following numbers. The leagues were redrawn ahead of the 2008 season, meaning that 2009 was the first season in which promoted teams could be relegated. In the seven seasons from 2009 to 2015, three of the 14 relegated teams (21.4 per cent) were heading straight back down after just one season in Division One. In the past four seasons from 2016 to 2019, five of the eight relegated teams (62.5 per cent) have dropped out after a single spring.

If Meath are going to buck the trend, they have to start immediately. The good news for them is that losing your opening two games in Division One doesn’t always have to be one-way ticket through the trapdoor. Teams have clawed their way out of deeper holes than this and stayed up.

Take Tyrone, for instance. In both of the past two seasons, they’ve started out the league with back-to-back defeats and still finished in the top half. Or Kerry, who have been zero-from-two four times since the leagues were redrawn in 2008 and never been relegated. In fact, Kerry’s 2013 league campaign started with four defeats on the bounce and they still stayed up.

The bad news for Meath is that between the start and finish of that 2013 league, Kerry added Tomás Ó Sé, Eoin Brosnan, Colm Cooper, Paul Galvin, Kieran Donaghy, Donnchadh Walsh, Darran O’Sullivan and Bryan Sheehan to their mix. Granted, Meath are missing a few at the moment but we’re not so much talking apples and oranges as apples and the combined annual output of Valencia and Seville.

Still, the stats are the stats and they say that nothing is inevitable just yet. Across 12 seasons of Division One football, 24 teams have lost their opening two games. Of those, 13 have beaten the drop and 11 have been relegated. Three teams have started with two defeats and a draw and two of whom have stayed up – Tyrone last year and Mayo in 2008.

Lose three in a row, however, and it’s almost always curtains. Twelve teams have started zero from three and only three of them have survived – that Kerry 2013 team, Kerry again in 2014 and Mayo in 2016. Long story short, Meath’s spring is more or less stillborn unless they beat Mayo in Navan on Sunday.

Killian Clarke is taking the year out from playing for Cavan but he’s seen the sharp end of the stick in Division One and can feel the sting of it yet. Cavan have been in the top flight twice in 12 seasons and on both occasions they were relegated straight away, failing to recover from shaky starts each time. Add their opening three games last year to their first three in 2017 and they picked up a solitary point from a possible 12. They needed snookers before February was out both times.

“When you lose early on, you’re putting yourself under pressure straight away,” Clarke says. “Because then it’s week-on-week and you’re looking at the fixtures and all you’re seeing is big guns. You’re playing against a higher standard of football, you’re playing against fitter players with better conditioning.

“You’re maybe picking up a few more injuries yourself because of that and you don’t have the calibre of replacement in your squad that the top teams do. It gets away from you quickly.”

Meath have lost to Tyrone in Omagh and were minced at home by Donegal last week. On both occasions, they were in the game for a decent stretch at the beginning but found out their fate with indecent haste once the temperature went up. Donegal, against whom they played two nail-biters last year in Division Two, plundered three goals in 11 minutes last Sunday to put them away with very little fuss.

“There’s a couple of big differences,” says Clarke of the step up. “The main one is the teams in Division One are so much more clinical. You have room for making mistakes or misses. The key stat when you’re playing in Division One is your shooting percentage needs to be over 65 per cent to be in games down the stretch and 70 per cent to be winning them. In Division Two, you’ll get away with a good bit less than that.

“The other one is kick-out strategies and the systems goalkeepers come up against for kick-outs. You get your kick-out away an awful lot easier in Division Two, which means that straight away you have a platform to go off. You can go on the offensive nearly every time from your own kick-out because of that. So you’re spending so much more of the game in possession of the ball without having to do an awful lot to get it. Whereas in Division One, it’s under pressure every time.

“The flipside as well is that when the other team have a kick-out in Division Two, you can afford to press higher up on them. There’s more chance to make them kick long or to turn them over. So you’re on the front foot a lot more.

“We found that when we went into Division One, if we tried an aggressive press against some of the top teams – say three lines of three high up or four in the full-forward line – we weren’t getting those easy turnovers that we’d been getting the year before. The good teams are better at keeping the ball, more aware, more accurate. So you tend to fall back then and invite them on.”

All of which goes to show – yet again – the need to redraw the leagues and to go back to the days of 1A and 1B, 2A and 2B. The distance between the teams at the top of the game and its middle classes has become ingrained by the current structure, leaving the likes of Meath, Kildare, Roscommon, Cavan and the rest gasping for breath the occasional year they get to mix it with them.

And so the gulf gets wider and the material needed to bridge it gets harder and harder to fashion. Meath spent the first three years under Andy McEntee striving to get to the business end of the sport to test themselves out on a weekly basis. They won’t be the last to find themselves blown to smithereens by the granting of their wish.