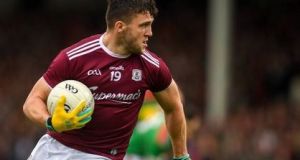 Damien Comer: he is named to start his first game for Galway since August 2018. Photograph: Getty Images

Spare a thought for Colm Boyle. It’s seven years, five months and 15 games in league and championship since Mayo beat Dublin, and Boyle is the only player who has started every last one of them. He has been named again in James Horan’s team here, along with fresher faces like Oisin Mullin, Ryan O’Donoghue and Jordan Flynn, to have another go. Nobody beats Vitas Gerulaitus 17 times in a row, and all that.

Mayo were blessed to get out of Ballybofey with a point and given their league record against Dublin it’s hard to make argument for them here. Dessie Farrell put out a fairly strong side against Kerry last week, and still didn’t need the likes of Jack McCaffrey, Jonny Cooper, Mick Fitzsimons, Con O’Callaghan, Cian O’Sullivan, Stephen Cluxton, Michael Darragh Macauley or Diarmuid Connolly. Should see one or two of them here.

A slightly odd trend here. In the two seasons since Galway got back into Division One, this fixture has gone to the away team both times, and set the winners up for a tilt at the title proper. Damien Comer is named to start his first game for Galway since August 2018, and Corofin’s midfield driving force Ronan Steede is down to make his intercountry debut at the age of 28.

Of the Kerry newcomers, Liam Kearney took the eye as an early sub last week and is worth keeping an eye on when given another shot. Obviously the forward line has limited space for fresh faces, but we should expect to see Dr Crokes forward Tony Brosnan soon as well, four years after making his debut. With Galway still bedding in some new elements, Kerry probably have enough here.

Two sides happy with last week’s outcome meet. Laois’s Lazarus trick in Roscommon rounded off an interesting match in which they became the leading users of the advance mark, scoring 0-4 off it. Armagh were very impressive in trimming a lack-lustre Cavan side. The full-forward line of newcomer Conor Turbitt, Riain O’Neill and Stefan Campbell from play outscored Cavan, and their defence is unlikely to cough up easy scores.

Mickey Graham will want to get the show back on the road, but on top of the withdrawals from the panel the injuries picked up in Armagh leave him short in attack. Westmeath got off to a good start with a gritty win over Clare. Cavan’s difficulties create an opening for the visitors.

Both these sides had to rally as the clock ticked dead to secure draws in their opening games, Derry at home to Leitrim, and Down away to Tipperary. Down go to Cork next weekend so can’t really afford to drop this one at home. Paddy Tally has the Kilcoo players, and their availability could tip the scales.

Carlow dug in well to beat Wicklow, but having to do it a man short highlighted the occasional disciplinary problems. This is an opportunity against Paul Galvin’s young team who fell away in Antrim after a poor start.

SUNDAY (matches at 2pm unless stated)

This could all be over quickly for Monaghan. Even though Galway clearly had the better of them last week, there was at least a draw there for the taking and they left it behind them. With a trip to Croke Park coming up next Saturday, it means they have no wiggle room at home to Tyrone. Anything short of a win and they’re in a relegation dogfight already.

Mickey Harte’s most pressing concern is probably to get clarity on where Cathal McShane stands. Seems silly that he was in Omagh last week in his street clothes when there was nothing to stop him togging out. Mark Bradley’s return is a boost but he’s a different sort of player. Tyrone need to know what they have so they can see where they’re going.

It’s not entirely clear why Donegal at 1/2 are such red-hot favourites on the road here. This pair played out a couple of highly entertaining league encounters in Division Two last year, both of which required Donegal to come from behind in the closing stages to win. Plus, Meath have been hard to beat in Navan during the league these past few seasons, albeit at a lower level.

Michael Murphy surely won’t be made dig in for 70 minutes in every game during the league so it’s possible he’ll be given a rest for some of this one. Patrick McBrearty is back in the squad but hasn’t played for three months. It won’t be a huge shock if Meath come out with the points.

Given the championship implications for teams in the division there is unseasonal urgency about this for Clare after last week’s narrow defeat in Westmeath. Jack O’Connor’s push for promotion wobbled at the outset until Daniel Flynn celebrated his return with a critical goal. They’ll need to keep it going here.

Fermanagh gave a good account of themselves in Newbridge, and the liveliness of their forwards at times is a warning for Roscommon, whose defence was fairly rocky even if they got away with it until the calamitous two injury-time goals. The Connacht champions really need this as promotion ambitions won’t survive more dropped points.

Tipperary had plenty to take out of their opener, holding on for a draw against Down despite playing for over half an hour with 14 men. They ought to have enough for a Louth team that stuttered away to Longford.

So much for the prediction in these pages last week that it was hard to see Leitrim nicking a point against anyone. Sorry, Terry. Truth be told, they probably wobbled with the line in sight against Derry and could well have seen it out with a bit more cool. That said, Cork are a different proposition. If they’re not Ronan McCarthy has problems.

Longford have had the whip-hand in this fixture for a while and are unbeaten in their last three meetings. Offaly showed well early on against Cork last week and though they ultimately faded, they were good enough to lead at half-time. Build on that and they can take the points here.

Off to a winning start, Limerick will expect to extend that against a London side that yielded Sligo’s first win in two seasons.

Wicklow will be disappointed not to have made more of the man advantage in Carlow, whereas a young Waterford side couldn’t catch 13-man Limerick and will be up against it here.

Paul Taylor finally broke Sligo’s duck with a high-scoring, five-goal trip to London. Antrim are the league’s second highest goal scorers with their three against Wexford. The Ulster county have a strong team this year and can take the points.

Manchester City go 15 points clear; Gordon D’Arcy on what we can learn from Italy win 07:36
Gordon D’Arcy: Ireland merely picked through the carcass of Italian rugby 06:00
Munster looking to drive home their advantage on Thomond Park run-in 06:00
Brian O'Connor: Elliott revelations leave racing’s good name in state of disrepute 06:00
For a young one obsessed with football, Gregory’s Girl was heaven 06:00
Crossword Get access to over 6,000 interactive crosswords