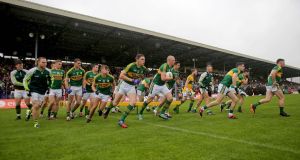 The Kerry team break from the team photo before the Munster final replay of 2015 at Fitzgerald Stadium. Kerry went on to win 1-11 to 1-6. Photograph: Donall Farmer/Inpho

The redoubtable footballers who represent Cork in tonight’s Munster final may or may not be delighted to know that this isn’t the worst streak by a Cork team against Kerry in the long history of games between the two counties. It isn’t the second, third or fourth worst either – and won’t be even if they lose again tonight.

They haven’t had a win against Kerry since 2012, losing four and drawing one of their most recent encounters. But they still have a ways to go to match the poor unfortunates who had to come up against Mick O’Dwyer’s teams in late ’70s and early ’80s – they had to endure 10 games without a win between 1975 and 1983 – although they did manage a couple of draws.

Go back further still and Cork didn’t register a win in seven games between 1956 and 1966.

For the streak of all streaks, though, you have to go back to the beginning of the last century. Cork lost 17 games in a row to Kerry between 1909 and 1942, only bringing it to an end with a draw in the 1943 championship and a win in the replay. The past few years have been rough on the current generation of Cork players but they needn’t worry about making that sort of history. The worm will turn, surely to God.

If and when it does, it will most likely be because they’ve overturned the pattern of their games against Eamonn Fitzmaurice’s side. In the five games they’ve played since Fitzmaurice’s first Munster final in 2013, Kerry have won four in a brutally similar manner.

The way of it has generally been Kerry bouncing out to an early lead, Cork steadying the ship for a bit, Kerry kicking on coming up to half-time and putting the game to bed after the break.

Last year was a classic of the genre. Kerry were 0-5 to 0-1 up after 10 minutes, playing some as-you-like-it football, fast-moving and accurate both in front of goal and approaching it. They kicked four points from four shots from play before Cork even put together an attack.

Chasing the game is no picnic against Kerry but Cork have become well practiced in it. And so they gradually grew into the game as the half wore on, with Ian Maguire coming to the fore in midfield. A game that had looked like it was getting away from them was instead brought to heel, with the sides swapping scores equally from the 10th minute to half-time, at which the scoreline stood at a respectable 0-11 to 0-7.

The entirely predictable ease with which Kerry filed the game away after the break surprised nobody, all the same. The burst from the blocks again after half-time with two points from Stephen O’Brien, one from David Moran and one from James O’Donoghue after a goal chance was saved. Just like that, in a game that was just about viable at half-time, Kerry were suddenly eight points up in the 38th minute. Nothing left to say.

It’s no accident that the one time Cork have been able to upset the usual chain of events, the 2015 Munster final ended in a draw. That day, it was Cork who made the early start – bounding out to a 1-1 to 0-0 lead after 10 minutes. It was the one time they weren’t losing at the 20-minute mark.

If they are to make anything of tonight’s final in Páirc Uí Chaoimh, the one stat above all they have to turn around is the weight of minutes they spend chasing the game. The overwhelming feature of their last five matches is the sheer amount of time Kerry have spent in the lead.

The numbers here are a little rough and don’t make variations for stoppage-time since no leads changed hands in those periods (Fionn Fitzgerald’s point in the drawn game in 2015 was the last kick of the game). But they give a pretty good indication of the holes Kerry have dug and tossed Cork into over the course of the streak.

If we take the five games as adding up to 350 minutes, Kerry have led for 273 of them. By contrast, Cork have been in the lead for only 27 minutes across the five games. Take out the drawn game and their total minutes spent in the lead during the four defeats is a paltry four. They were behind for 67 minutes in 2013, 58 in 2014, 51 in the 2015 replay and from the moment, 12 seconds into last year’s game, when Paul Geaney pointed on the turn as Kerry scored off the throw-in.

The long and short of it is that Kerry have established a template for putting notions out of Cork’s head – quickly, ruthlessly and painfully. If Ronan McCarthy’s side are to have any chance tonight, they need to disrupt it from the start.