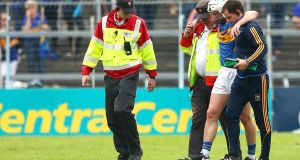 Tipperary’s Brendan Maher will undergo surgery on the ACL in his right knee next month after injuring himself during his side’s recent loss to Clare.

The 29-year-old injured his cruciate ligament during the defeat for the 2016 All Ireland champions and will be out of action until next year, although Tipp are already out of the championship.

Maher pulled up at the 68th minute mark during last Sunday’s two-point loss and now the worst fears have been confirmed.

Tipp picked up just two points in the inaugural Munster SHC round-robin, crashing out of the championship along with Waterford.