Leitrim forced to pull out of Down clash in Newry 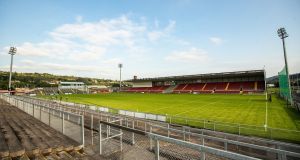 Saturday’s clash between Down and Leitrim in Newry has been cancelled. Photograph: Tommy Dickson/Inpho

Saturday’s Down-Leitrim AFL Division Three match has been cancelled, as Leitrim have said they are unable to fulfil the fixture, scheduled for Newry. This first came to light when Down released a statement on Saturday morning but was subsequently confirmed by Leitrim.

The move came as a surprise in that Terry Hyland’s team list had been forwarded to Croke Park on Thursday and a team meal had been organised in Down. The news only began to emerge on Friday night. A combination of coronavirus testing and injuries is believed to have forced the situation.

Leitrim released the following statement: “Unfortunately, due to the greater health situation that has gripped the country, Leitrim GAA has found itself having to concede our Allianz League encounter versus Down today.

“A number of players are awaiting test results and unavailable to travel. Other factors also prevented further players from being available, considering this greater health situation, and in this course of action, we must respect this situation.

“In summation, we are unable to field a team. We are living through very difficult times in an ever-increasing pandemic situation. Leitrim GAA is acutely aware of the efforts that have been made to get the inter-county season up and running.

“However, on this occasion, we cannot fulfil this fixture which is regrettable. We are hopeful that our situation will have resolved itself before next weekend’s fixture versus Tipperary.”

The fixture conceded, Down move up to second place in the table on nine points, one behind leaders Cork, who need only a point against Louth this afternoon to secure promotion.

It’s not necessarily fatal to Leitrim, either, but they now need to defeat Tipperary, currently with them on three points, in what could well be a ‘winner takes all’ finale in a weeks’ time. The only complication is that they will need to avoid a logjam on five points, as were they to be level with Tipp they’d win on the head-to-head only if no other teams were on the same mark.

Currently, Offaly, who play Tipperary today, and Derry are on five points. Were it to come down to scoring difference, Leitrim would be at a disadvantage, as they are minus-17. The method of separating teams on equal points in case of a forfeit is to strip out the team that benefited.

As a result, the counties involved would simply take away the points difference from their matches with Down. Offaly would benefit most, gaining the eight points by which they lost the fixture. Tipperary drew with Down whereas Derry lost by two.