Dublin Under-20s turn up the heat to reel in Tyrone 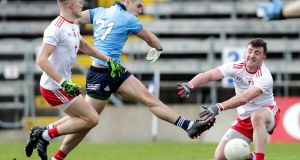 A game that simmered and bubbled for 50 or so minutes in Cavan suddenly came to the boil as Dublin increased the heat to secure their Under-20 All-Ireland football final place.

Not surprisingly, Ciaran Archer was among those who applied that extra heat for Dublin with two important late points and 0-6 in total from the reigning U-20 Player of the Year.

Dublin outscored Ulster champions Tyrone by 0-5 to 0-1 from the second water break on to seal the come from behind win and were also grateful to the returning Brian O’Leary.

An All-Ireland U-20 runner-up like Archer in 2019, O’Leary missed the Leinster championship earlier this year through injury but scored a first-half goal here and also kicked the first of those late five points for Dublin.

It was heartbreaking for Tyrone who led by 1-7 to 1-5 at half-time and were four points clear at one stage in the opening half after dominating the second quarter of the game at Kingspan Breffni.

Dublin had the wind advantage after the break and used it to loft over a number of long-range points but, initially, they just couldn’t get on top of a dogged Tyrone.

In fact, Paul Devlin’s Ulster champions led by three points with 16 minutes to go and were still two ahead after that second water break as they edged within touching distance of next weekend’s final against Kerry or Galway.

But when the need was greatest it was Dublin that dug deepest with O’Leary, Archer, Lorcan O’Dell and finally Lee Gannon all splitting the posts for crucial scores.

Afterwards, Dublin manager Tom Gray said he could see no reason why the final shouldn’t go ahead next weekend despite the ongoing uncertainty around possible changes in the Covid-19 restriction levels.