After taking the lead, Gavin’s side were in control and always looked like retaining the title 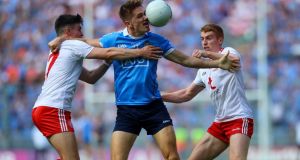 Overall this was a six-point stroll for Dublin. It was a big win everywhere but on the scoreboard and even there it was a decent margin. The quality of the match was quite good but it wasn’t really a contest after the first quarter.

As a preliminary point about the selections, I don’t agree with this business of messing around with the team announcement. Frank Burns and Richie Donnelly were both in the programme and didn’t start for Tyrone. It’s very hard to deal with that coming up a big match.

It’s tough enough to know that you’re not playing without the public being told that you are. Neither player in my view made had any great impact when brought on and I wasn’t surprised.

Essentially this game was decided between the 18th and 23rd minutes when Tyrone went from plus-four to minus-two.

For Tyrone to compete they needed a strong first quarter and they got it, almost to perfection. They were scoring regularly, making good turnovers and Dublin were rocking their own confidence with wides and dropping the ball short. It was a great position for the challengers at the end of the first quarter.

If there was a downside it was the poor quality of the finishing, six wides in that first quarter, and it was after a wide that Ciarán Kilkenny was able to get Dublin’s second score. Then Niall Morgan had one of the lapses with the restart, scuffing it and hitting a low trajectory. It was all the invitation Dublin needed and it ended up in the penalty.

It’s fair to point out that referee Conor Lane had a very good match. There were a couple of technical ones, relating to black cards that might have been different, and there was too much off-the-ball stuff but he got the big calls right, including both penalties.

The first one was the more important and it was a really good call. Tiernan McCann got in a foul challenge on Paul Mannion when he would have been better off leaving it to Mattie Donnelly, who managed to knock the ball clear.

Mannion’s finish was brilliant – all the more so in that he had taken a hit and had to wait a couple of minutes before taking the kick. Another bad kick-out and another point and Dublin aren’t just back in the game but they’re motoring.

Seven up at half-time and it’s not hard to know what was being said in the dressing-room; keep up the momentum, keep that gap and make sure there are no goals.

In truth, Dublin never looked like losing. The tale of the quarters is interesting once Tyrone’s early advantage was gone. Dublin led by seven at half-time, by seven at the end of the third quarter and by six at full-time, which was very good game management.

They scored 10 points after the break, seven of which were unopposed. It showcased their patience, excellent ball movement, which had the added benefit of running down the clock, and they demonstrated such control that they had no wides in the second half. It was extremely comfortable.

Even in the first half their scoring efficiency was better than Tyrone whose shot selection was very average and their accuracy even worse. They did get their perfect start but lacked composure at this level. However, I think they’ll benefit from this and come again.

They were playing against a finely-tuned machine – and I don’t mean robots; I mean highly-skilled players who move so well together as part of a unit.

One of the big considerations in any final is getting the match-ups right and, if you don’t, fixing them as quickly as possible. Tyrone’s most important players never really got going – Niall Sludden, Peter Harte, Colm Cavanagh and Mattie Donnelly, who was particularly quiet.

For once, Dublin’s substitutes’ bench had a subdued impact when you consider that they came into a match ripe for the plucking. But, for whatever reason, they never really got going.

Maybe it was the chaotic end with Tyrone piling forward and big gaps appearing but although they got a couple of points from Kevin McManamon and Michael Darragh Macauley there was probably more there for them, as Tyrone looked out on their feet.

It’s a really considerable achievement by Jim Gavin and Dublin to have won four All-Irelands in a row and they showed the value of their great experience and composure. They have looked worthy champions all year.