Jim Gavin: ‘It’s a physical contact sport, so it is what it is ’ 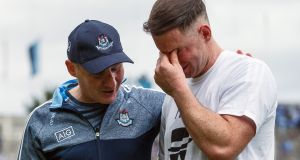 Jim Gavin gives very little away in his dealings with the media, but it was maybe his shortest-ever answer that best summed up Dublin’s dominance in completing their four in a row on Sunday.

Asked whether the achievement would have been possible without the influence of team captain and five-time All-Star goalkeeper Stephen Cluxton, the Dublin manager answered (following a pause and stutter): “I don’t know.”

What could he say? Answer yes and he’d be disrespecting a man he had seconds earlier described as being “hungry, he’s relentless, he’s ruthless and that’s a great trait to have in any captain. The leadership that he gives to other players and how he demands standards of himself first and foremost. I mean he’s the first at training, he’s the last to get off the pitch.”

But he couldn’t say no, either. Despite Cluxton making a record 200th senior appearance for the Dubs and finding a team-mate with 29 of his 31 kick-outs in the process, to single out one individual would be against the ethos of his entire squad.

Dublin’s six-point win over Tyrone was another triumph for the fundamentals of Gavin’s footballing philosophy: skill, relentlessness, patience, trust and decision-making.

While Tyrone kicked 16 wides and took on 13 shots from outside the scoring zone – missing all but one of them – Dublin kicked only six wides. Even after trailing by 0-5 to 0-1 after 20 minutes against a team renowned for holding on to a lead, Dublin did not panic. They maintained their championship average of 55 per cent possession and controlled the remainder of the match.

“They go five-one up and have the momentum but our guys didn’t blink,” said Gavin. “Which is a great characteristic to have. We just kept going through the phases to get ourselves back in the game. Even at half time – the game is only a break in play and it still needed to be finished – and the guys just stayed with our process of going through each phase of play.”

When asked how important Dublin’s first-half penalty and the stoppage in play for treatment to Paul Mannion proved in disrupting Tyrone’s rhythm, the Round Towers club man said: “No. Well, I can’t speak for Tyrone but if it happened to us we wouldn’t flinch. It gave them an opportunity to recover if anything else. It was very warm there pitchside. Probably 23 degrees, I’d imagine. Quite humid, so I’m sure they players would take it as an opportunity. But that’s just the way I’d look at it.”

As for the off-the-ball niggle? Unlike previous years, when Dublin players have been at the centre of the controversy, this time it was the Dubs who were at the receiving end of the dark arts. But, as ever, there was no complaint: “It’s an All-Ireland final,” he sniggered. “There’s a lot on the line, so players are pushing each other really hard. It’s a physical contact sport, so it is what it is. And there were some great exchanges. I think the GAA should be really proud of both counties, and the spectacle that they put on.

“We go after the skills of the game. We’ve worked hard at it now over the last couple of years and probably got due reward. You know the first 10 or 15 minutes, they were a bit wayward, but the Tyrone boys put them under serious pressure. But that mental resolve within the Dublin team is just a pleasure to witness. And that collective ethos that they have. They see the prize is the collective serving the county, and not the self, and a lot of players there who didn’t even get game time today. And they didn’t show it but they must be disappointed not to play in an All-Ireland final. They just want the team to do well. It’s team, team, team and they’ve demonstrated that again today.”

Even Bernard Brogan failed to make the match-day squad, despite completing his return from a cruciate ligament injury.

“It’s probably the hardest part of the road giving that news that a player can’t travel. Because you know how much they’ve put in and we can only name a limited number of players on match day. So that’s the really difficult, challenging bit of the job. Because you’re breaking a lad’s dream essentially, that he can’t play in an All-Ireland final. So it wasn’t just one player, we had 34 on the squad this year, and to be given that news, to eight players, is really tough. Really tough on them. But they didn’t blink, they just wished the team the best, and who knows, if it went to a replay or whatever, they were going to be ready. And it was great to see them joining in down below too in the celebrations in the dressing room. To see the joy. It was just a fantastic energy and atmosphere in the room. The lads who’ve won a few and the lads who’ve won their first. That’s why we give our time, to see that.”

He wasn’t going to be drawn into talk of five in a row either. Tyrone manager Mickey Harte, however, was happy to discuss the future. Harte expects Colm Cavanagh and the rest of his young squad to all be available again next year, with some crucial experience gained from Sunday’s defeat.

“Dublin put you under pressure and they don’t give you the shots in the right places, and that’s true to a degree, but I think we made some very poor choices across the course of the game and if you’d even taken half of those out of the script, then things could’ve been very different. But it’s a learning exercise for our players. Colm was the only player for us today who has played in an All-Ireland senior final before, so there was a lot of inexperience from our players at that level. But I just can’t fault the players for the effort they put in.”

1 Gerry Thornley: Ireland don’t want to box themselves into a corner
2 Owen Doyle: Ireland suffered from officiating of the breakdown
3 Thomas Galligan and Cavan raring to meet Dublin in Croke Park
4 Kevin McStay: Maybe a knockout All-Ireland Championship is the long-term solution?
5 No further players to be called up to Ireland squad to face Georgia
Real news has value SUBSCRIBE