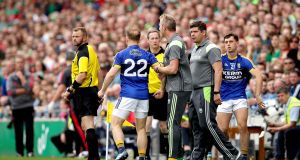 Darran O’Sullivan argues with the linesman after receiving a black card against Mayo in the All-Irelnad semi-final. Photograph: Ryan Byrne/Inpho

Darran O’Sullivan is keen not to be represented as bitter about all that has befallen him in recent times but it’s fair to say that he’s frustrated.

Having finally battled back from an injury-disrupted season to get a crack at the All-Ireland semi-final replay against Mayo, he found himself on the wrong end of a contentious black card decision just nine minutes after coming into the match as a half-time replacement.

“That’s putting it lightly. It was a joke. I asked [referee David Gough] – he wouldn’t answer me. The linesman [Anthony Nolan, who called it] wouldn’t answer me either. I ended up getting a suspension on top of it [for verbal abuse]; and he [Nolan] gets the minor final to ref!

“You have a referee, two linesmen and four umpires and you have a fourth official; yet they are getting decisions like that wrong and I get a suspension for questioning it?

“That’s all you hear in football these days; the referees. Even at half time for the game the last day I was following it on Twitter – it was all about the decisions by the referee or off-the-ball stuff. You don’t get that in hurling.”

He believes match officials should be expected to communicate with players and whereas the rugby protocol of allowing captains to query decisions might be impractical, he says, because football isn’t as static a game, some variation on it would be welcome.

O’Sullivan’s humour hasn’t been improved by having to watch Sunday’s All-Ireland.

“I think that’s normal; I can’t really understand when I see players from other counties tweeting about how exciting the game is – how can you be excited about a game that you want to be playing in. I wouldn’t even watch it with the Kerry lads . . . I’d watch it on my own, cursing myself.

“To be honest, I don’t want anyone to win it – I was half-hoping they’d call it off! It was a gripping game; who would you want to win it? You don’t really want to see anyone win it. I suppose I know a few of the Mayo fellas from different things – good guys, they’ve put in a lot of sacrifice. I suppose it would have been nice to see them get it – Dublin have been dominating – just break it up.

“People go, ‘at least if the team that beat you won it’ – but it doesn’t really make a difference; they beat you and you’re out.”

He doesn’t believe there’s anything fortunate about Dublin’s repeated one-point wins over Mayo.

“It’s not a coincidence anyway. At the moment, they’re the best team out there; they’re mentally very strong. They back each other. Seven minutes to go, they’re two points down. I don’t think they changed anything. They just trusted their plan, trusted each other and got over the line. That’s what it comes down to.”

He’s not sure whether he’ll continue with Kerry next year but thinks that he probably will. He’s been busy with a new business venture at home in Glenbeigh, a restaurant on the beach called Rosspoint, which has had a successful tourist season.

O’Sullivan thinks next year will be better with the introduction of the round-robin All-Ireland championship format.

“It should be good. I wasn’t too sure about it. But the long and the short of it is that fellas want games. You can do all the training in the world – that’s why I actually thought it benefited Mayo this year. They were playing games, very like training, and players were stepping into form.

“At the moment there is a bit of a disadvantage winning your province. Dublin’s toughest game was the All-Ireland final. Now they still got over the line so it’s grand for them but if the scores had been reversed it would have been, ‘Jeez, we hadn’t enough competition or competitive games coming into it’.”

Darran O’Sullivan is a Sky mentor and was at Thursday’s launch in Abbotstown of Sky Sports’s €3 million investment in the GAA Grassroots partnership. It will run for five years and support Super Games Centres, the Youth Forum and the Games Development Conference