Kevin McStay: Dublin’s ability to maintain tempo for 70 minutes will be decisive 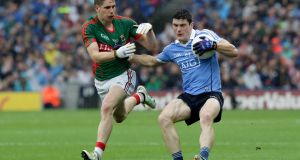 My sense is that Jim Gavin won’t start Diarmuid Connolly while I would also keep his nemesis Lee Keegan in reserve as it’s only four or five weeks since he had a serious illness. Photograph: Morgan Treacy/Inpho

Maybe it’s the relatively rare modern occurrence of the same final for the second year or the crowded history between the counties but I don’t think there are any external factors that will have any relevance on Sunday.

By that I’m talking about experience of the big day, the hunger to succeed, issues of legacy – three-in-a-row for Dublin and first win in 66 years for Mayo – and which team is favourites.

Mayo have been so close to Dublin whenever they play that there will be no doubt in their minds that they are well capable of winning.

So, what are the relevant issues?

The first thing that strikes me about Dublin is the ability to maintain tempo for 70 minutes.

Jim Gavin has been leaving a host of All Stars on the bench. I don’t think Mayo can afford to have fresh legs and smart brains coming on to the pitch and taking on tired, and in some cases tired Mayo defenders, who have been around for a while. The legs will be hurting with 10 minutes to go and they’ll battle on but it’s hard to do with the same efficiency as in the first half.

They must also respect the amount of possession they get. They tend not to. Their big men secure a lot of ball but Mayo don’t mind it as well as they should.

So Mayo will have to think very carefully about their own substitution strategy. They made a big call when dealing with Kieran Donaghy and they will need to do something similar to deal with the likes of Michael Darragh Macauley, Bernard Brogan, Diarmuid Connolly and Kevin McManamon when they’re introduced.

Stephen Rochford and his management need to be very careful of the stamina of their big men. Dublin are really good at draining it, especially when Macauley et al arrive. If he’s not tracked and the likes of the O’Sheas and Vaughan are running out of wind, it becomes really serious, as the pitch opens up and easier scores become available.

They must also respect the amount of possession they get. They tend not to. Their big men secure a lot of ball but Mayo don’t mind it as well as they should. There are a few players in particular who the opposition will know are careless on the ball. They must also score what they should score. Even a handful of poor misses in front of goal will drain confidence and Mayo can’t afford that.

A big question is, “will Mayo push up?” My sense is that they must. I heard the lads on the Sunday Game saying they didn’t think they would and Seán Cavanagh said the same.

Dublin have this raw, savage pace and if they break the tackle they’re gone. That’s the danger of pushing up but you can’t die wondering and I think they have to initially, just to see if Stephen Cluxton’s on his game.

You can always take off the push if you want but for the first 15 minutes, definitely. It sets a great tempo for Mayo. Certainly it did against us and in the Kerry games. They pushed up and made a massive contest of the opposition kick-outs.

This really allows Mayo to be all-action and part of the spin-off is that Cian O’Sullivan isn’t given a free ride at six.

In terms of the match-ups, this is particularly important. Aidan O’Shea is probably the best choice because even though O’Sullivan will test him aerobically, I don’t think he’s a Dublin player who will hurt you dramatically in an offensive play.

I wouldn’t like Jack McCaffrey or James McCarthy to be getting away from me but I could live with Cian doing it once or twice.

Realistically, there’ll be no match-up for O’Shea behind the Mayo midfield. If he’s not playing in the middle he’ll be at 11 and probably switch intermittently with Cillian O’Connor into full forward.

It’s interesting when Mayo do this and the minute Cillian gets the ball he doesn’t look to pass – the first option is always long into O’Shea. He’s got very good at that in the past 18 months. A very clever player, when he floats out it’s only for one reason: launch quick ball.

A big talking point with Dublin is whether Diarmuid Connolly starts. Maybe he isn’t in Jim Gavin’s plans given how little time he got against Tyrone.

But everything was going swimmingly in the semi-final. What happens if it gets to the 53rd minute and things aren’t going that well? My sense is that Jim Gavin won’t start Connolly but also that he’ll need him because Mayo aren’t going away in this final.

I’d probably also keep Connolly’s nemesis in reserve. I rate Lee Keegan very, very highly but it’s only four or five weeks since he had a serious illness (cellulitis). That takes a while to get out of the system and his form has dipped. I don’t know what’s going on in training but unless he’s improved, starting him on the bench has to be a consideration.

On form, the champions hold all the aces but Mayo are the one team who has disrupted them in recent championships. I think Dublin definitely peaked early in 2016 and after the semi-final their graph was beginning to dip rather than peak whereas I’ve no doubt they made a conscious decision this season with the three-in-a-row in view, not to focus as much on the league. They went back to their clubs in May.

They’ve never been behind in this championship but that’s likely to change. Last year Mayo put pressure on and Dublin needed two own goals and a penalty in fortuitous circumstances.

As a Mayo man and a current manager I think the finalists are incredibly well matched and I don’t see the big gap that many people identify.

Having said that, Dublin are rightly the favourites but there’s no sense to me that Mayo aren’t going to come with a way to beat them.