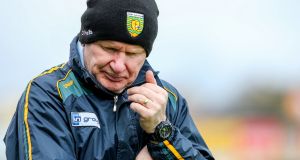 Declan Bonner is set to take over from Rory Gallagher as the new Donegal senior football manager.

It is expected that the outgoing county Under-21 manager’s name will go before a special county committee meeting - which includes all the club delegates - that has been called for Friday night.

The 1992 All-Ireland winner is the choice of the special selection committee set up to fill the vacancy left by the sudden end-of-season departure of Gallagher.

The selection committee took the decision on Wednesday night and the 1992 All-Ireland winner and the other two candidates Shaun Paul Barrett and Cathal Corey were informed by telephone on Thursday morning.

Reacting to the appointment, Bonner’s ex county manager Brian McEniff said he was “the right man for the job”.

“But we will need to give him time for there is a lot of expectation out there.

“He is also very much involved with his club so he is very much up to speed with what is going down in Donegal.”

McEniff also suggests that unsuccessful candidate Corey might even be part of Bonner’s backroom team.

“I am pleased for Declan, and in our period of re-building his experience of the lads will be vital.

“It will not be an easy job because expectations are always high in Donegal and he will be under a good deal of pressure.

“What he needs is time and patience and our supporters need to be patient too”.

So what are Bonner’s main strengths?

“Well he has been involved since county minor level in 1983. I have watched him the whole way up and when he got injured at the tail end of his career I suggested that he maybe should get involved in management.

“I was thinking in terms of underage but he jumped into senior county management first and was most unlucky to lose an Ulster title in 1998.

“Derry caught us with a late goal, but Declan has gained a lot of experience and is a football man. He has a good football sense and that will stand him in good stead and of course he will need a very good backroom team.

“It will not be an easy task and it will take time and we need to give him time.”

Bonner’s expected appointment brings to an end six weeks of intense speculation. The Na Rossa clubman previously managed Donegal seniors from 1997-2000. He took them to an Ulster final in 1998 when they were beaten by a last minute Joe Brolly goal.

In more recent times he guided Donegal to an All-Ireland minor final in 2014 when they lost to Kerry, and he also took this year’s Under-21’s to an Ulster title only to lose heavily to Dublin within days of taking that provincial title.

Bonner has deep knowledge of the current senior squad and has worked with most of them since they were Under-16s.

An affable and popular figure in the county who has a deep knowledge of Donegal football, Bonner has never made any secret of his desire to manage his county again and was part of an unsuccessful double ticket with Charlie Mulgrew in 2008, the year John Joe Doherty was appointed.

All of the clubs in Donegal were informed of Friday’s meeting on Thursday.