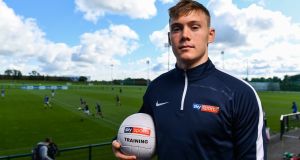 Con O’Callaghan: “When we started going into the corner we were lucky enough not to get turned over, but we got there in the end.” Photograph: Sam Barnes/Sportsfile

For the closing minutes of Sunday’s All-Ireland final, Con O’Callaghan was reduced, like any other Dublin supporter, to watching metaphorically from behind the couch.

In the 68th minute he was replaced by Niall Scully and from then on through an extensive injury-time, beset by nearly unbearable tension, he sat there, unable to do anything more as the fate of the Sam Maguire was settled.

“Yeah, it’s tough,” he said at Thursday’s launch of the Sky Sports GAA Grassroots partnership. “I wasn’t watching the match, to be honest. I had my head in my hands, looking at my feet.”

When the decisive moment came six minutes into injury-time and Dean Rock addressed what would be the match-winning free, his attitude hadn’t changed.

“I didn’t watch but I backed Dean. The lads beside me jumped up, so I knew he got it!”

The torment didn’t end there, as referee Joe McQuillan played more than eight minutes of injury-time before whistling for the last time. Asked how he had felt about the at times hair-raising sequence of keep-ball with which Dublin closed out the match, O’Callaghan said he had expected full-time to come sooner.

“Yeah, we probably thought that it might get blown up a little earlier but when we started going into the corner we were lucky enough not to get turned over, but we got there in the end.”

It’s been a sensational year for O’Callaghan, who had already picked up an All-Ireland club hurling title with his club Cuala and in April he was joint-captain of the Dublin under-21 footballers who won the last All-Ireland title at the grade, beating Galway.

His senior success last weekend was embellished with individual plaudits, from inclusion in the Sunday Game team of the year to nominations for both an All Star and the Young Footballer of the Year award.

His overtures in both the All-Ireland semi-final and final were goals, plundered through the middle of the Tyrone and Mayo defences. Reflecting on the latter he acknowledges the influence of the black card when asked had it protected him from being pulled down.

He said that there are plenty of people around him to keep his feet on the ground, including his father, Maurice, who made an All-Ireland appearance himself in 1984, replacing Joe McNally for the last quarter of the GAA’s Centenary final.

“He likes to bring it up; he likes to chat about himself from time to time!” his son confirmed.

A commerce student in UCD, he is currently doing an internship with Grant Thornton and hopes to play Sigerson with the college next year – club commitments allowing – but isn’t sure whether he’ll launch a dual assault on third level’s major titles by playing hurling in the Fitzgibbon Cup.