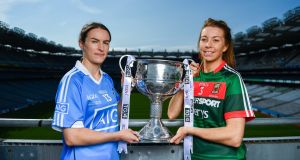 In 1999, Mayo defied the odds to win an All-Ireland ladies semi-final against Meath. The Royals were considered such overwhelming favourites that even the Mayo County Board was planning a night out for the players after the game to wrap up their season.

But a new power was rising in the west, and after six failed attempts at the semi-final stage, Mayo had finally broken through the barrier to book their place in Croke Park.

Manager Finbar Egan permitted the players to have a few drinks that night to celebrate, but he knew the tempo at training would have to increase if they were going to compete with the reigning champions Waterford in the final.

They reconvened at the Balla GAA grounds the following week for a session, and over the course of two-and-a-half hours, Egan flogged them in the pouring rain.

He put them through a series of punishing runs, including 65 sprints to the 45’ and back. The players responded to every challenge that Egan set for them that night, and coming off the pitch after the final run, he knew they were ready.

“We were only meant to do 40 sprints,” he explains, “but we dropped the time. Our trainer Johnny Mullin joined in to do a bit of running with them and they missed the time so they had to go back, and Cora [Staunton] ate him. I remember Martha O’Malley getting sick and I told her to hurry up to get sick and get back into the next sprint.

“It was great craic but I remember at the final whistle, we had made the last time and they cheered, clapped and hugged, and we all went off the pitch together. There was no way we were going to be beaten in the final.

“We had a simple rule. If I looked out on the pitch, and you weren’t running, I was taking you off, because there’s no way Waterford could run that hard for an hour. And they couldn’t, so we just slaughtered them in the last 10 or 15 minutes of the All-Ireland final.”

A reporter, who was also involved in inter-county management at the time, was watching that gruelling session from the sidelines. While interviewing Egan later that evening, he said it was the “most insane training session that he had ever seen”.

But Egan knew the players had the tolerance for his training methods more so than any other team he has mentored before or since.

It’s well documented that Mayo were forced to go into that All-Ireland final without a fully-fit Staunton, who had suffered a broken collarbone a week before the game.

They made the decision to start her, such was her importance to the team, but were forced to withdraw the teenage star from Carnacon after just 47 seconds. It was a tactical call that ultimately served them well as they overpowered Waterford to win the Brendan Martin Cup.

As the Mayo men had already lost an All-Ireland semi-final that year, the ladies team were treated to a rousing reception at the homecoming.

“It was mayhem,” says Egan. “There was huge excitement and huge enjoyment. And to be fair to the county, when the girls came home on the Monday night, the turnout in Mayo was unreal. The men’s team had lost and we went to places like Claremorris where there was about 4,000 or 5,000 people there waiting for the girls.

“We were going to small places in the middle of nowhere and there was about 400 or 500 people there. We had about 1,000 people following the bus back on the Monday, it was unreal. You wouldn’t believe it if you hadn’t seen it.”

Egan first joined the Mayo fold in 1998 on the recommendation of one of the senior players Diane O’Hora, who would later go on to captain the 1999 All-Ireland-winning side.

Throughout his six seasons in charge, he guided them to five All-Ireland finals, in which they were victorious on four occasions. They reached the All-Ireland semi-final in 2004, but were defeated by eventual champions Galway.

Those standards of excellence didn’t always exist in Mayo however, and Egan knew radical changes were required when he was first appointed to the job.

“I remember a player not being able to run a lap of the pitch. And that player later played in an All-Ireland final in 1999 as well as a few more. So, people had the talent.

“Cora wasn’t playing when I took over at first. She had stepped aside and we got her back. And in the six seasons that I was involved, she missed three training sessions and for two of them she was ill. That’s the level of commitment we had.

He added: “Myself and Cora would have sparred quite often and there were times when we wouldn’t be talking. We weren’t the best of friends on the pitch but she always wanted what I wanted, and that was for Mayo to win.

“People forget that she has a huge drive. If you were looking for a personality on the pitch, you’d compare Cora to Roy Keane. ”

Mayo are back in their first All-Ireland final since 2007 and are facing an experienced Dublin side who are appearing in their fourth consecutive decider.

Staunton remains a key cog in the Mayo machine, but the way the team has been utilising her this season reminds Egan of the winning side he managed all those years ago.

“The reason why Mayo won back then wasn’t because of Cora. The big thing I notice about why Mayo are doing so well is that you have to forget that you can’t win without Cora, and Cora this and Cora that.

“Cora would be the first to admit that it’s about the team. Dublin wouldn’t have the same scoring threat as Mayo, Dublin have to overpower Mayo. If Mayo are competitive enough and fit enough, they’ve a right good chance of winning it.”