Champions total highest since Tyrone in 2003. Mayo’s 12 record for finalists in qualifier era 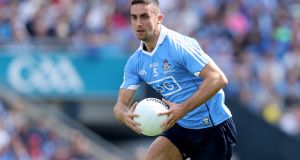 Dublin’s James McCarthy: he has been nominated for the Footballer of the Year award. Photograph: Oisin Keniry/Inpho

The release of the nominations’ list for this year’s PwC football All-Stars reflects Dublin’s historic achievement of a first All-Ireland football three-in-a-row since 1923.

The champions have received the highest number of nominations for 14 years, with 13 of the players who started Sunday’s defeat of Mayo in the final included on the short list for this year’s awards.

The two who don’t make it, Eoghan O’Gara and Paddy Andrews, both had a quiet final and were replaced at half time. Captain Stephen Cluxton is the most decorated of this year’s long list, and is nominated for what would be a sixth award and a first since 2013, but he faces a battle against Mayo goalkeeper David Clarke.

In what is entirely consistent with the intense rivalry between the counties – Sunday was the third time Dublin beat the Westerners by a point in an All-Ireland final – both Cluxton and Clarke are nominated for the Footballer of the Year award, voted on by intercounty players, together with Dublin’s James McCarthy and Mayo’s Andy Moran.

Usually three candidates are short-listed, but the All-Stars’ selection committee, comprised of full-time GAA media, were unwilling to commit to one player over the other – or excluded either of the other nominees – as such an option would have predetermined the identity of this year’s All- Star goalkeeper. So for the first time there will be four candidates on the ballot.

The only one of Dublin’s current All-Stars not to be nominated is Diarmuid Connolly, who had a significant influence off the bench in the final but who missed 12 weeks of the season after the suspension incurred in June for pushing a linesman in the Leinster quarter-final against Carlow.

Brian Fenton supplements his two All-Stars with a third nomination, one for each year of his career to date, a remarkable feat to go with the fact that after three seasons he has yet to lose a senior intercounty Championship match. His partner this year, James McCarthy, is also short-listed.

Rookie Con O’Callaghan (although he made a brief appearance off the bench in the 2016 Championship) rounds off an amazing year – he has picked up All-Ireland medals at club level with the Cuala hurlers, the last under-21 title with Dublin, and a senior medal with Dublin– with his first All-Star nomination.

Also named is 2015 Footballer of the Year Jack McCaffrey, who had a year out last season, and who was injured in the opening minutes of Sunday’s final.

Mayo, another agonising defeat behind them, have received 12 nominations, a record for losing finalists in the qualifier era and recognition for several excellent displays in the All-Ireland stages.

They currently hold four of the back seven All-Stars from 2016, and all have been renominated: Clarke, Brendan Harrison, Lee Keegan and Colm Boyle.

Five of the six forwards have also been short-listed, with only the injury-hindered Diarmuid O’Connor missing out.

Tyrone are next, with the defeated All-Ireland semi-finalists gathering six nominations. A heavy defensive emphasis and an underwhelming scoring display against Dublin in the championship combine to leave just two of the team’s forwards in the running, Peter Harte and Niall Sludden.

Both centre-fielders Anthony Maher and David Moran are included, as well as half of the attack with former Footballer of the Year James O’Donoghue, the long-serving Donnchadh Walsh – favoured to pick up his first award – and Paul Geaney, one of the championship’s top four scorers from play, nominated.

Kerry finish next with five, including 2016 All-Star Paul Geaney.

Others nominated are two each from Connacht champions Roscommon, Kildare and Down, whereas Donegal, Armagh and Monaghan are also represented amongst 10 counties.

In all there are 24 survivors from last year’s nominations, including 11 of last year’s All-Star winners: Mayo’s Clarke, Harrison, Keegan and Boyle and Cillian O’Connor; Philip McMahon, Jonny Cooper, McCarthy, Fenton, Connolly, Ciarán Kilkenny and Dean Rock from Dublin; as well as Geaney and Harte.

The Hurling nominations have been released, and both sets of winners will be announced at the beginning of next month.

Nominations for the 2017 Footballer and Young Footballer of the Year awards have also been announced. In the senior category as mentioned there are two apiece for Dublin and Mayo.

The Young Footballer of the Year will be one of the following: Con O’Callaghan, Seán Powter of Cork and Galway’s Michael Daly.

The individual awards will be voted on by the membership of the GPA, and the winners will be announced on the night of the awards, which will be presented on Friday, November 3rd.