The top 30 moments of the football summer: the top 10 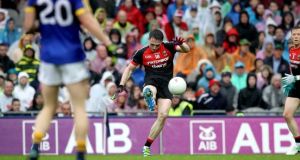 Paddy Durcan equalises for Mayo and takes the All-Ireland semi-final with Kerry to a replay. Photograph: Ryan Byrne/Inpho

The moment at which Mayo became a different proposition. Five points up at half-time, the normal course of events would have seen a Kerry comeback. Moran was having none of it, catching high and trading a one-two with Cillian O’Connor to nail down the lid.

Mayo Were Gone, Part One. Derry were visibly tiring but they still had a point lead as the clock ticked 70. This was a brilliant goal, worked the length of the pitch through precise passing. Cillian O’Connor dished off the last one for Loftus to finish with aplomb.

Roscommon were playing with a six-point lead into what felt like a six-point wind. Stack pounced onto a Galway kick-out 50 metres out, took the mark, ignored the whistle and made for goal, finishing to the bottom left corner. Game, set, Connacht title.

Galway had a plan for Donaghy - he treated them like errand boys sent by grocery clerks to collect a bill. A long ball in high found his big white gloves, marker flailing, sweeper floundering. Just for kicks, he turned inside on his left foot and roofed the finish.

End of the road for the Rossies, and maybe the true start of it for Mayo. This was the day they said enough was enough. Roscommon were blitzed and goals from Kevin McLoughlin, Andy Moran and Keith Higgins made Mayo’s point emphatically.

Only the geniuses can do it like this. Armagh were a point up in the 69th minute and this was the most elegant killshot of the year. Left alone in front of goal, he dropped the ball onto his left foot, nurdled it around the onrushing Tipp keeper and sidefooted home.

Connolly was manhandled by three Carlow players on the sideline and when the call went against him, he pushed linesman Ciarán Branagan in the shoulder. And so began the summer’s most tiresome circus. Pushgate, Spillanegate, CCCCgate, 12-week-gate.

The Mayo News came up with five different markers for Donaghy in the build-up and none of them were Aidan O’Shea. So when he went in full-back after five minutes, the hum around the ground was palpable. He probably lost the battle; the war was another story.

This was supposed to be different. But then it was just the same. Tyrone gave the ball away in midfield and a quick kick-pass left O’Callaghan with the Hill beckoning him home. Dublin’s new starlet needed only one sidestep and a sight of goal and that was that.

Mayo have five minutes of injury-time to find an equaliser - the only surprise is probably that they didn’t find a winner too. Consummate patience from Donie Vaughan sent up Durcan for a return pass and one of Mayo’s most reliable shooters did the business.