‘We got a good performance here, but we didn’t get the complete one' 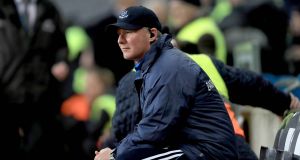 Whatever else Jim Gavin may consider worthy of our praises, Dublin’s now record run of 35 unbeaten games clearly doesn’t rate. Maybe because records are only there to be broken. Or that no team would dare want to be considered unbeatable.

Gavin certainly knows the dangers of that: the only significant defeat during his reign as Dublin manager remains the 2014 All-Ireland semi-final defeat to Donegal, when many considered his team practically unbeatable.

Or maybe it’s because only medals and honours stand the test of time, and everything else puts time out of mind.

“The currency we deal in is performance,” deadpanned Gavin after his side’s 21-point demolition of Roscommon, as if someone had presented him with a celebratory cake alight with 35 candles, and taking one look at it, he blew them all out in one derisory puff.

So the value and plaudits are all our own – because Dublin’s achievement in Croke Park on Saturday night doesn’t come around very often, if at all. Victory over Roscommon stretches their unbeaten run in league and championship matches to 35 – eclipsing after almost nine decades the previous record of 34, which had stood to the Kerry footballers from between 1928-1933.

And it was a performance for the future as much as the past, near veterans like Paul Flynn and Bernard Brogan seamlessly shining with newcomers Niall Scully and Ciarán Reddin, with a season opener from Diarmuid Connolly for good measure.

Gavin’s focus on performance is justified, continuing with Monaghan in Clones next Sunday, to keep track Dublin’s quest for a fifth successive league title.

“Maybe when the players finish their careers they might look back and they might take something from it,” said Gavin, his only concession to their record run. “I can’t control what people say about the team, and it [the record] certainly has not been mentioned by the players.

“Games they’ve performed in like this one are now in the past. They need to regroup again and focus on what’s ahead. That’s always been our philosophy and it ain’t going to change now.

“You never get that perfection piece, in any game. At times the boys obviously played well. But what was most satisfying was the collective work rate, from the first minute right through until the end.

“We got a good performance here, but we didn’t get the complete one, and that’s what we’re always striving for and what we’ll be going after against Monaghan, which will be a completely different tactical game but one that we’ll enjoy.”

That search for “perfection”, that complete performance, may not be that far off: Flynn was superb, hitting 1-6, all from play, and Brogan, 33 next month, also soaring about Croke Park as if trying to impress for the first season too, not the last.

It ended on a scoreline – and 31 Dublin scores – that afforded them the chance for a victory salute well in advance of the finish. Roscommon also lived up to their billing as the weakest team in the division. That’s another story.

After scoring only two goals in their five games so far, Dublin hit the net twice here – Flynn finishing off Brogan’s pass after 15 minutes, and Kevin McManamon striking his now trademark net-shattering shot after 57 minutes. For the record, that makes it 48 goals and 556 points in those 35 games – averaging 20 points per game.

Jack McCaffrey also came on early in the second half, adding one of six points off the bench, including three from Conor McHugh. “We’re satisfied with where we’re at, we’re slowly building,” added Gavin, with some considerable understatement. “This team has always been about the sum of its parts, and I think you saw that tonight.” Have Dublin’s strength ever been deeper in his reign?

Still it comes with one caveat: Roscommon came to Croke Park already on a hiding, the only consolation from this sixth successive defeat is the footnote to Dublin’s historic unbeaten streak. Manager Kevin McStay continues to blame it on youth and inexperience, but lack of desire and attitude exposed itself above and beyond all that.

They were reliant on mostly distance efforts from the likes of Ciaran and David Murtagh, and Enda Smith. “People have to be patient with us,” said McStay. “I know the patience is wearing thin at home. It’s a young team. They’re 22, 23 years of age. They’re three, four, five years behind these big teams in terms of conditioning.

“And people just have to hold their nerve and stay with it. If they want to chop and change and get rid of half them young fellas and bring back what? It doesn’t work like that.

“So we’ve moved on to a longer-term plan. Three years. I’ve spoken to the board about it. That’s what I want to do. And it would be nice if people hold their nerve and stay with it. It is difficult, these experiences. They’re not simple ones, obviously.”

Dublin, meanwhile, head to Clones next weekend, looking to make it 36 unbeaten. So it continues.