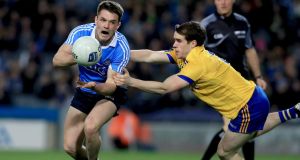 Dublin’s Eric Lowndes is tackled by David Murray of Roscommon during the Allianz League Division One game at Croke Park. Photograph: Donall Farmer/Inpho

They say records are there to be broken, that only medals and honours stand the test of time. Yet what the Dublin footballers achieved here in Croke Park – and the breathtaking style in doing it – may not come around again for a long time, if at all.

This victory over Roscommon stretches their unbeaten run in league and championship matches to 35 – eclipsing after almost nine decades the previous record of 34, which had stood to the Kerry footballers from between 1928-1933.

Although this was a performance about the future as much as the past, near veterans like Paul Flynn and Bernard Brogan seamlessly shining with newcomers Niall Scully and Ciaran Reddin, with a neatly-timed cameo by Diarmuid Connolly for good measure.

Flynn, as early as it still is, suggested his best it yet come, hitting 1-6, all from play, and Brogan, 33 next month, played as if trying to impress for the first season too, not the last.

It ended on a scoreline – and 31 Dublin scores – that afforded them the chance for a victory salute well in advance of the finish, a performance largely without fault and thoroughly worthy of the occasion. Roscommon also lived up to their billing as the weakest team in the division, helping afford Dublin play frequently exhibition football.

And of course they’re not done yet. Jim Gavin is concerned this merely keeps Dublin on course for a fifth league title in succession.

After scoring only two goals in their five games so far, Dublin hit twice here – Flynn finishing off Brogan’s pass after 15 minutes, and Kevin McManamon striking his now trademark net-shattering shot after 57 minutes. After that Dublin were up 2-22 to 0-9, and many of the Roscommon supporters were already out the gate.

Jack McCaffrey also came on early in the second half, along with Connolly’s first appearance of the season, and in the end Dublin scored six points off the bench.

Beginning here in Croke Park on March 7th, 2015, with a draw against Tyrone, they’ve now gone unbeaten in 21 league games and 14 championship games, including six draws: 26 of those were played here in Croke Park, only nine of the road.

Not forgetting, however, the little nod to Longford, the only team to beat Jim Gavin’s Dublin during that period, winning their O’Byrne Cup semi-final in January 2016. Still it’s an astonishing run, truth is the only significant game Dublin have lost under Gavin is the 2014 All-Ireland semi-final to Donegal

Roscommon came to Croke Park already on a hiding: five games down, five games lost, the only team in the country not to have picked up a single point in the league so far. Relegation already assured, the only consolation from this sixth successive defeat is this footnote to Dublin’s historic winning streak.

They were reliant on mostly distance efforts from the likes of Ciaran and David Murtagh, and Enda Smith, although they did squander a few goal chances which would have put a little respect on the scoreboard.

But there was no stopping Dublin’s onslaught, everyone from number seven to number 15 scoring. Paddy Andrews also hit three from play, and Dublin’s depth continues unabated as even Shane B Carty scored when coming off the bench.

The evening also featured a historic curtain-raiser with the first women’s league game at Croke Park, Mayo getting the better of Dublin there thanks to a late, late winner from veteran forward Cora Staunton – the perfect way of making her first appearance at GAA headquarters since 2008.

Dublin meanwhile are off to Monaghan next weekend, looking to make it 36 unbeaten, also looking for the win to seal their place in the league final. So it continues.