Roscommon in doldrums after dream of breakthrough turns sour 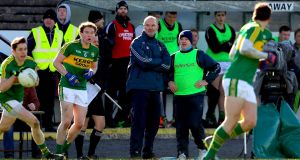 Roscommon manager Kevin McStay on the sideline with selector Liam McHale during the league game against Kerry. Photograph: James Crombie/Inpho

Time is merciless. It’s only this weekend last year since Roscommon were agreed by all and any to be the coming team in Division One. They had won four games on the spin, all of them away from the bog of Dr Hyde Park.

They’d beaten Kerry in Killarney, Cork in Páirc Uí Rinn, Down in Longford and Donegal in Letterkenny. They were the top scorers in the country across the four divisions and their Donegal win had bought them an Irish Times headline screeching: “Irrepressible Roscommon underline status as a team going places quickly”.

And now? Five games down, five games lost. The only team in the country not to have picked up a single point in the league so far. Relegation all but assured, their Division One status teetering on a ledge and awaiting only on the slightest prod from Dublin on Saturday night in Croker to bring on the plummet. Still going places quickly, just in the wrong direction.

Since and including their defeat at home to Mayo this day last year, their league and championship record reads played 14, won 3, drew 1, lost 10. Those three wins were over New York, Leitrim and Sligo. The 10 defeats include sound beatings from Galway (11 points), Kerry (10), Mayo (8), Monaghan (7) and last July’s qualifier loss to Clare (6). They had the potential to be anything and it all turned to dust.

The reasons behind their predicament are at once pretty straightforward and clear as mud. It doesn’t take a genius to work out that the loss of anything up to nine of their frontline players from this time 12 months ago has left the cupboard with a bare look. To explain the various absences, however, requires a code-breaker’s facility for reading between the lines.

A few are plain and simple. Geoffrey Claffey, Senan Kilbride and Niall Carty retired. Ian Kilbride is away serving with the Defence Forces and is expected back in time for championship, Cathal Compton missed the early months through injury but came off the bench last Sunday against Monaghan.

Others are a bit more complicated and delicate. Niall Daly played against Tyrone in the first game, got dropped for Donegal and is no longer on the panel. Neil Collins hummed and hawed for a time at the start of the season over whether to rejoin the panel for 2017 or go travelling and the upshot has him leaving the country in a couple of weeks. Cathal Cregg was apparently invited back for 2017 but apparently declined.

There’s a level of he-said-he-said in all three cases. In the wink-and-elbow world of local football talk, you have to be careful about drawing clarity from certainty, especially since human relationships are always far more nuanced than certainty should allow. What is not in doubt is that all three would be starters and go-to players if all was right on Planet Rossie. It isn’t and they’re not.

There are others, too. Management calls, to live or die by. Two other Daly brothers, Conor and Ronan, played in the 2016 league but left the panel of their own accord soon after and haven’t been asked back. Donie Shine, Seánie Purcell and David Keenan simply didn’t make the panel this time around. Add the ha’pence to the pence and soon enough you’re coming close to double figures of talented and/or experienced bodies that aren’t around the place anymore.

The results are obvious and predictable. The spine of the team is anyone’s guess. Roscommon have had four full-backs in five games, three centre-backs and three different partners for Tadhg O’Rourke in midfield. Competition for places has dropped off in the attack, where an injury to any of the Smith or Murtagh brothers will likely expose a paucity of options off the bench.

“It’s hard to be too critical,” says Shane Curran, the former Roscommon goalkeeper. “You can’t really expect anything different because the quality of the personnel just isn’t there. You can’t lose the amount of experience and knowledge and quality they have over the last year and expect to compete.

“The problem when you look at the list of players who aren’t there is that you’re talking about seasoned senior club footballers. David Keenan is the only one from the junior club. And they’re being replaced by fellas from intermediate and junior clubs and they’re just not able to cut the mustard. I feel very sorry for the players because they’re being asked to play at a standard that’s just not commensurate with their ability and their physical condition.”

Roots of the malaise

It didn’t all fall apart overnight. The roots of the malaise go all the way back to Kevin McStay’s original appointment alongside Fergie O’Donnell. Despite McStay’s achievements with St Brigid’s, he could never have O’Donnell’s local hero status either within the squad or in the county as a whole. That’s fine as long as everything is going well.

But from the start, their partnership looked far more velcro than jigsaw. McStay had Liam McHale in as a coach and quasi-selector, O’Donnell had Stephen Bohan and David Casey alongside as actual selectors. As the season progressed in 2016, there was a gradual distancing between sides, with disagreements over Roscommon’s tactical approach.

When O’Donnell resigned in September, a year into a three-year arrangement, he released a statement saying he was doing so to avoid “the inevitable distraction that would result from a potentially divisive contest” between him and McStay. The fall-out made things uncomfortable for the players, some of whom had been with O’Donnell in one guise or another since their mid-teens.

Curran played for over a decade alongside O’Donnell and won an All-Ireland under McStay. He knows both men well both in terms of personality and footballing philosophy. For him, the original sin of one’s square peg to the other’s round hole is one the Rossies are paying for now.

“I think Kevin’s problem overall was bringing Fergie in in the first place. I think that was the genesis of the problem. It was done in the best interests of everybody, I have absolutely no doubt about that. But it has turned out to be a bad decision. Two managements don’t work. And in particular, they can’t work when you have two people who think about the game completely differently to each other.

“It ended up in a mish-mash last year. Earlier on in the league, we were playing very expansive football, football with the foot, fellas getting into the habit of kicking, fellas tackling hard. Playing the game the way it should be played, the way Dublin try to play.

“But what happened then was that Fergie’s influence really took over once they lost a couple of games. Losing a game or two became the end of the world. And instead of keeping on playing the way they were playing and trusting that the results would come, it became confused. Once we got hockeyed by Kerry in the league semi-final, basically the whole thing fell apart.”

That was last year. The big issue for the 2017 crop is the sheer level of scores they’re conceding. They’ve given up 4-89 in the five games so far – whatever about the four goals, the 89 points is a staggering amount to be watching loop over the bar in February and March football. They’re the only county to have given up more than 80 white flags in the five games – London are next on 3-77.

There’s no good future in a team that concedes an average of 18 points a game.

For his part, McStay has stayed reasonably sanguine about it all, save for a tragicomic row with local radio station Shannonside. Instead of treating Gay Sheerin’s idiotic contention that a Mayoman shouldn’t be on a Roscommon sideline for the arrant nonsense it is and gliding past, McStay and his team withdrew all co-operation. Not the biggest deal in the world but a sign of the tension and bad cess around the place these days.

“Kevin is a very affable fella and so is Liam,” says Curran. “They would in general be non-conflict kind of guys. But he obviously wants to do things his way and I think he has created a rod for his own back. That’s his decision and I just find it sad the way it has worked out. I’m heartbroken for them too. I’m close to Kevin and Liam after what they did for Brigid’s and it’s rough on them the way it’s turned out. But unfortunately, it’s just not good at the minute.”