Mayo in a state of apprehension ahead of Tyrone test 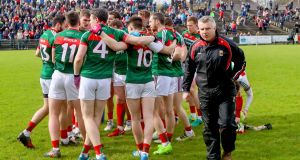 What’s up with Mayo? All week long, the good health of the west of Ireland kingpins has been the subject of much discussion and Tyrone’s team of physicians will be keen to carry out a thorough examination in Omagh on Sunday.

A defeat against Mickey Harte’s men may well leave Mayo hosting Donegal in the last round needing some kind of result to avoid relegation.

On the face of it, there is nothing alarming about this. Mayo have been moody league campaigners for the last seven years and as everyone knows, the only thing left for this particular generation to do is to go that extra inch and win the All-Ireland.

Still, it is inevitable that outsiders will scrutinise their league outings for signs of what they might do differently in the summer. So far, Mayo are keeping everyone guessing as to what that might be. They were given a free pass after the Saturday night blow out in Dublin on March 4th: that is not the time of the year to be chasing after Jack McCaffrey and company. But last Sunday’s 1-14 to 0-15 loss to Cavan provided a sharper source of worry.

“It feels like the end of the road may be coming,” wrote former Mayo midfielder Billy Joe Padden in a fascinating column in the Mayo News this week.

And that’s the fear for Mayo fans. This may not be an especially old Mayo team but it seems like they have been hunting for Sam Maguire since the last days of the Nixon administration. They kicked 0-8 from play during an encouraging first half against Cavan but the sight of Andy Moran collecting a ball, pivoting inside and firing a point with that trusty left foot made you wonder – how are Mayo ever going to allow this man to retire?

Shouldn’t Andy Moran be wrapped up with a quilt and hot chocolate for these rudimentary March assignments? Where is the next generation’s answer to Andy Moran? Isn’t it mildly alarming that he finished as Mayo’s top scoring forward in the match?

“In an ideal world, Mayo wouldn’t have to be playing the likes of Andy and Colm Boyle and Keith Higgins every game out,” says Padden. “I’d be the first to say that this is the best Mayo team since 1951 in terms of consistency and in what they have given but yeah, that fear that they are reaching the end has been there for the last season or two.”

Mayo did kick some fine scores against Cavan – 0-7 of Mayo’s total was contributed by the half-back line and midfield. There was also a nagging sense Mayo were making it up as they went against a prototype Ulster set-up; compressed defence filled with strike runners waiting to attack on the turnover.

They are going to meet the same with bells against Tyrone on Sunday. Plus the excuse that Mayo are trying out younger players doesn’t stack up. They started with a deeply experienced line-up from one through eight and didn’t run the bench until the last 20 minutes. Cavan did a tidy job of marginalising Cillian O’Connor, having Killian Clarke all but follow him to the car-park afterwards and coughing up not so much as a single point in frees.

Cavan were understandably ecstatic: it was their first win in Division One. But two bad back-to-back defeats for Mayo and the questions raised by this defeat are enough to make home supporters fear that their side will not have the kick when it matters this summer.

“We had only two points this time last year and had to go to Roscommon who were beating all around them at that stage,” said Stephen Rochford flatly when quizzed about this after the match in Castlebar.

It is a fair point. The league is deceptive. This time last year, Roscommon were playing the most flamboyant football in the country. This season, they haven’t got going. It can be argued right now that Mayo are performing as Mayo do in the league: dutifully and with no great regard for it. Sticking about in Division One and then knuckling down for a championship campaign which will ideally end in six months (!) is the summit of their ambition.

“There’s an element of truth in that – even in the geographical sense that half their squad is in Dublin during the winter,” says Padden. “But still, Cavan was surely a game they couldn’t lose, it was the one that keeps you up in the division. And this team doesn’t need the mental knock of getting relegated.”

The return of the older O’Shea brothers, Séamus and Aidan, will deepen Mayo’s physical presence and influence in the middle of the field

“Marginal gains are what is required. How do they achieve that? And whether they stumbled across it or not, the last four games of the championship last year, when they basically played a blanket defence, worked. Even though they were short in the end I feel it is their best chance of winning an All-Ireland. Because when you are not a particularly high-scoring team, the last thing you want is to be get into a game which demands big scores.”

The return of the older O’Shea brothers, Séamus and Aidan, will deepen Mayo’s physical presence and influence in the middle of the field. They are using Kevin McLoughlin as an out-and-out forward at the moment and opted to play Lee Keegan at centre-back. As they demonstrated last summer, they know how to tighten their defence when required.

But whether Mayo are going to come with anything radically different this year remains to be seen. In 2015, the deployment of Aidan O’Shea as a mobile, ball-handling full forward seemed to work a treat. But it didn’t get them over the line.

And the question of how best to use the enormous power which the Breaffy man can generate remains a live one. How Mayo use O’Shea and player-of-the-year Lee Keegan may well dictate the pattern of their attacking play. These are matters that will come into sharper focus once the championship begins. But it is safe to say that tomorrow the green and red tribe will head to Omagh in a state of apprehension.