‘The Dublin players are humble enough to realise that if they’re not on it, they can be beaten’ 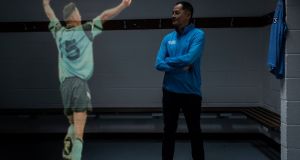 Jason Sherlock has heard all the whispers around the Dublin football team going into the pandemic-altered championship, the difference this year being he can actually listen to them.

Stepping aside as Dublin coach after their five-in-a-row last year, along with manager Jim Gavin and most of the rest of the backroom team, Sherlock is no longer turning a deaf ear, although certainly isn’t believing all that he hears either.

“I think you can apply that logic to everyone,” he says of Dublin being more “vulnerable” as they prepare for straight knock-out championship for the first time in 20 years. “I get that you try to build up a case that they’re vulnerable, but every year Dublin are vulnerable.

“Every year we went in, we had to ensure we were better. The levels of last year wouldn’t be good for this year, so it’s how they can improve and perform to a level that’s better. There have been challenges in terms of how they can do that, their preparation, the environment they’re going into. People aren’t sure what that is.

“Vulnerability is good because that means you know you’re human, and if you know you’re human that means you can be taken out on any given day. I’ve no doubt the Dublin players are humble enough to realise that if they’re not on it, they can be beaten. That’s the challenge and I’m sure that’s the kind of message the players and management might be instilling in them. That’s nothing new for this Dublin team because that’s been thrown at them over the years.”

The question of just how much Dublin can or will need to improve on last year may well depend on the challenge presented to them.

“I’d have very low expectations of any intercounty footballer at the moment because these are obviously very strange times,” reasoned Sherlock. “But knowing the guys and how much they care about themselves and about playing for Dublin they will certainly do the best they can.

“In terms of the expectations and the levels they have reached, one thing they have had very little of is adversity and I think there is another layer there again when they do face that adversity.

“If you go back through the five-in-a-row, as much as people might say they won a five-in-a-row, in every year there is games and times it was put up to them and they responded in the right way. Now as a fan, it will be really interesting to see how those guys progress when they face adversity. I’ve no doubt that that will happen in games over the months to come.”

There will be a few things different about Dublin’s challenge, however; the retirements or unavailability of players like Diarmuid Connolly, Bernard Brogan, Jack McCaffrey and Darren Daly, and definitely uncharted territory for new manager Dessie Farrell.

“I would have known Dessie as a team-mate and a friend, but I have deliberately stayed away from the guys, they need to have their own time to figure things out. As a person, his heart is in the right place, you can hear the language coming out of the players, he has a deep care for them and a deep care for Dublin football, so that’s a very good place to start.

“I think, from the management’s perspective, you could look at it in two ways. From a positive, it has kind of made a complete distinction between last year and this year with the longer break than normal. I suppose the downfall for that is I’m sure Dessie has struggled to kind of get a look at players and kind of bring his own thoughts and ideas to the set-up as quickly as he could. So I’d imagine that is the potential challenge for Dublin, and every team going into the championship.

“All intercounty management teams are going to have to adapt to the current environment, it’s not ideal and it sounds like from day to day their situations can change, so it is an extra layer of complexity that those guys have but at the same time I think Dessie, based on his experience, will be well capable to fulfil that role.”

With further restrictions around Covid-19 now being implemented in the North and seemingly South of the border too it’s virtually certain the entire 2020 championship will be played out without any spectators.

“There are other teams that kind of, you’d feel they could be playing anywhere and it doesn’t impact them. Off the top of my head, the one I’d be interested in is Mayo. I think Mayo have probably embraced emotion but they’ve also I think suffered sometimes with the emotion of crowds and situations in games, so it will be interesting to see what impact it has on all teams.

“I heard David Clifford talking about playing schools matches in Croke Park, so he’s used to playing there with nobody there. So it’s going to be new for everyone and every year, every championship, every match, it’s about adapting to the scenario, to the situation, and I’ve no doubt Dublin will prepare as well as they can.