Waterford show no mercy as Offaly put to the sword 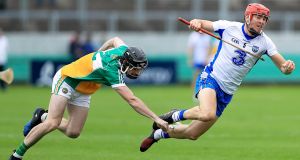 Offaly’s Ben Conneely in action against Barry Coughlan of Waterford during the All-Ireland Senior Hurling Championship round one qualifier at O’Connor Park in Tullamore. Photograph: Donall Farmer/Inpho

It was shooting practice for Waterford as they got their season back on track with a predictable runaway win over a woefully outclassed Offaly at O’Connor Park in Tullamore.

The Munster side went on a scoring rampage, chalking up 1-35 and resisting the temptation to go for goals.

It was impressive stuff by Waterford with 13 players contributing to their scoresheet, including three of their subs, all of whom were full of running when they came on.

For Offaly, it was another thought provoking afternoon and once Waterford settled down after a sluggish opening period, they were miles off the pace. Offaly competed well against the wind early on, and led by 0-4 to 0-2 after 12 minutes, while they were level at 0-6 each after 19 minutes.

After this, however, Waterford opened up full throttle and Offaly were swept aside. Waterford scored eight points without reply to pull away while a 32nd-minute goal from Shane Bennett helped them into a half-time lead of 1-18 to 0-8

Even with the wind to come, the only issue at stake was Waterford’s winning margin and they showed no mercy. With Austin Gleeson and Pauric Mahony among the many Waterford players in fantastic form, they continued to drive forward relentlessly.

Offaly just couldn’t compete in any facet as their very defensive set-up was ripped asunder time and time again. Waterford reached the 30-point milestone when sub Patrick Curran stroked over a 59th-minute point and they didn’t ease up after this as they laid out an emphatic statement of intent.