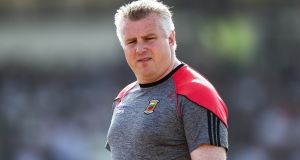 Stephen Rochford’s resignation on Monday evening as Mayo manager came after a day of intense rumour but there had been signs of uncertainty going back to the county’s exit from the All-Ireland qualifiers in June.

In the aftermath there was speculation about the future of his backroom team with county chair Mike Connelly saying publicly that he had heard there might be changes. Eventually three selectors, Donie Buckley, Tony McEntee and Peter Burke confirmed that they were stepping down.

Just two weeks ago, Rochford confirmed that he would be staying on to serve the two-year extension given to him last autumn by the county board but last week Connelly informed board delegates that the manager had a deadline of August 31st to complete his appointment of selectors.

When Rochford submitted the names of former Mayo captain Peter Ford, who also managed Galway and Sligo, and Ford’s joint-manager at the Breaffy club, Shane Conway and met with the executive on Sunday evening it is believed that the response was not enthusiastic, something essentially confirmed by the outgoing manager in his statement of resignation on Monday evening.

“It was apparent from what transpired at that meeting that the desired level of support for me as manager was not forthcoming from the executive committee. This disappoints me greatly.

“Accordingly, I see no value in meeting with the officers of the board and I am resigning my position as Mayo manager. I thank all those who supported me during the past three years, two of which saw Mayo come so close to winning the All-Ireland title.”

Responding, the Mayo county board statement didn’t address the issue of lack of support.

“We sincerely thank Stephen Rochford for all the hard work and commitment he has given to Mayo GAA since he was appointed in 2015. Stephen has given an enormous amount of service to Mayo and has given us as supporters many great days on the pitch.”

Mayo players, whose rebellion against the previous management of Pat Holmes and Noel Connelly, brother of the county chair, hadn’t made a collective stand on the issue although Jason Doherty last week welcomed Rochford’s decision to continue.

Rochford came closer than any other Mayo manager to winning the elusive All-Ireland title for the first time since 1951 in that he two lost successive finals, 2016 and ‘17, one after a replay, by a point to the Dublin team, seeking a record-equalling fourth successive All-Ireland this Sunday.

At the same time he didn’t manage in his three years in charge to win the Connacht championship that Mayo had held for the five previous seasons and this year for the first time since 2010, the county failed to reach the All-Ireland semi-finals.

There has already been speculation about his successor. Names such as former Donegal All-Ireland winner Jim McGuinness – unlikely as he has been building a career in full-time soccer – and James Horan, who led the county to the 2012 and ‘13 All-Ireland finals, have been mentioned.

Procedures for the new appointment will be decided by the county board in due course.

1 America at Large: On Long Island, longing for a return to our field of dreams
2 Dr Claire Molloy: ‘It is a privileged place to be, on the frontline’
3 Australian rugby staring into abyss as another crisis hits
4 Bournemouth’s Howe becomes first Premier League manager to take voluntary pay cut
5 ‘For 25 minutes I ran out of oxygen’: Pepe Reina on his coronavirus battle
Real news has value SUBSCRIBE