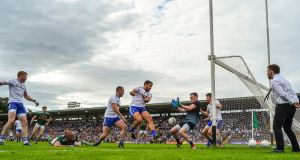 The football final appears in front of us like a grubby-faced child that nobody has the heart to go at with a wipe. A foregone conclusion at the end of a summer where complaining has become the true national sport. Too slow, too defensive, too many handpasses – you know the story yourself. Even the sainted Dubs are apparently too dull now. They may as well play the final behind closed doors.

But was it really all that bad? Or did we just decide it was? We were all too busy watching the hurling to notice that the football championship was chugging away merrily by itself, telling its own stories and paddling its own canoe?

Here’s a thing. On the afternoon and evening of June 9th – one seven-hour period – the following happened. Waterford had their first win in seven years and only their second qualifier win ever. Daniel Flynn scored the goal of the season against Derry. Tyrone came within 10 seconds of going out of the championship.

Andy McEntee had to be restrained by one of his own players from going after the referee as Meath were denied a stonewall free to equalise at the end of extra-time. Paul Rouse managed Offaly to a qualifier win after just three weeks in the job. Cillian O’Connor scored 3-9 against Limerick.

What do you remember of all that? Chances are, you saw the picture of McEntee going after the ref but nto a whole pile else. Between hurling and football, there were 15 games that weekend. The particulars of the Saturday qualifiers were swiftly lost in the breeze.

To wit, the 20 moments that made the 2018 football championship.

To ask a teenager in his first season to do the impossible when only the impossible will do ought to be out of bounds. But we know already that David Clifford is no ordinary teenager. Monaghan were, to rob from Douglas Adams, not quite home and dry but at least home and vigorously towelling off. James O’Donoghue put in a bespoke ball, Kieran Donaghy got a paw to it as it fell and Clifford, with a window the size of a keyhole to aim at, found the inside of Rory Beggan’s post. Ridiculous.

Like any good saga, it started small and then got spectacularly out of hand. Kildare came out of the Monday morning draw against Mayo. Everybody presumed the game would be in Croker. Everybody except Kildare – they’d be turning up in Newbridge as was their right. Cian O’Neill went on the Six-One news and put it up to Croke Park. In between, an Irish Times story had Croke Park telling Kildare they’d play where they were told. Boom went the dynamite. After two days of national outrage, Kildare got their way. Mayo walked into a tsunami on Saturday night. Kildare pulled off their best win in years.

Dublin 2018 personified. From a tight spot on the Tyrone 20-metre line, Ciarán Kilkenny turned and sprinted back on a loop from left corner-forward to centre-forward, busting a gut to get outside the Tyrone screen before finding McCarthy loose on the 45. You could tell from the way McCarthy sprinted onto the ball that he saw his chance immediately. A quick one-two with Dean Rock and he was in. Niall Morgan saved his shot but McCarthy got a fist to the rebound and Dublin were five clear. A devastating passage that summed up Dublin at their unplayable best.

Goal of the year by quite a distance. Flynn came steaming out onto the ball at left-corner forward and by the time he was crashing the ball past Ben McKinless, he had looped out and around six Derry tacklers, four of whom had managed to lay some sort of finger on him – all to zero effect. A goal of pace, power, skill and bravado.

Monaghan had itched and scratched and clawed their way into their first lead of the day. Seven minutes to go and they could sniff their first All-Ireland final since 1930. Tyrone weren’t having it. Peter Harte exploded into the game, piercing the Monaghan rearguard with a killer run to put Tiernan McCann away. Darren Hughes came across to block his shot but the ball spilled to Sludden who finished like Gerd Muller for the decisive score.

The year’s most outrageous point. With Monaghan a goal up heading into five minutes of injury-time, their main man took a pass on the Tyrone 20-metre line just a few steps in from the sideline. There was no shooting angle but he found one all the same, hooking a right-footed shot inside the far post. A jaw-dropping score.

Could Carlow football people ever have imagined a day like it? Not alone did they beat the second favourites for Leinster, they did so without kicking a single wide all day. Turlough O’Brien masterminded a good old-fashioned ambush with Paul Broderick flawless on the frees and Conor Lawless thundering through for the sealing goal. Carlow rising barely covered it.

This could have been it. This should have been it. In their 20th season playing in the football championship, New York were three points up with five minutes left in the second half of extra-time and they were going to beat Leitrim. But then Aidan Flynn nicked a point and when New York couldn’t get their hands on a kick-out, Darragh Rooney nicked another and Shane Quinn another and Noel Plunkett the winner. The wildest finish all year.

This is how you qualify for an Ulster final when you’ve only ever done it five time before. Hang in and hang around, frustrate a more vaunted opponent to their last nerve, then bang – a sucker punch at the death. Eoin Donnelly exposed Monaghan’s weakness under the high ball at exactly the right time and Fermanagh were going to Clones.

Tyrone were gone. Their season done in the second week of June. The five minutes of injury-time were up and Meath were a point ahead. Out of nowhere, McShane dodged around a tackle 35 metres from goal, jinked inside and split the posts. Extra-time brought its own dramas – refereeing and otherwise – but without McShane’s composure, nothing more was possible.

The boy with his finger in the dyke. Dublin were never going to be stopped entirely by the Laois goalkeeper but he did his bit anyway. As early as the second minute, he had to save from Con O’Callaghan and the action never let up. By the end, he had made four brilliant saves in a display that will possibly earn him an All Star nomination.

An inarguably brilliant game. The first half especially was a treat, with long distance scoring a feature from both sides. Kildare lost Daniel Flynn to a red card early in the second half and were running in sludge for the rest of it. Galway held them off but only just. Kildare went out on their shields. For Galway, it was their last good day of the summer.

Everything seemed up for grabs in this one until, as usual, a Dublin player made sure he was the one doing the grabbing. Scything on off the right wing, Scully collected Ciarán Kilkenny’s pass with five Donegal players between him and the posts. A driving slalom run around them and he was in for his first ever Dublin goal.

After Conor McManus had enjoyed himself being left one-on-one all afternoon against Kerry, Monaghan needed someone else to take the strain against Galway. Their youngest forward picked the right time to have his best ever game, putting up four points from play to send them into their first All-Ireland semi-final in 30 years.

The Ulster final looked like it would be best remembered for the presence of DUP leader Arlene Foster, only for McHugh to conjure up one of the best goals Clones has seen in years. Picking the ball up close to the right sideline, he turned and wriggled and danced inside the Fermanagh cover before crashing a high shot into the net.

Longford hadn’t beaten Meath since 1982. Here, they picked them off like they’d been doing it all their lives. They even survived a late Meath comeback, watching a five-point lead fizzle out to one in stoppage time. Sean McCormack sealed it for them and earned them a first Leinster semi-final spot in 30 years.

Clare came within a whisker of only their second ever championship win over an Ulster team, going four up in the 67thg minute when David Tubridy bagged the rebound from his own saved penalty. But out of nowhere, Armagh produced a grandstand finish, running in an unfeasible 1-5 in stoppage time to swipe the spoils. One of the all-time great smash-and-grab jobs.

Donegal had managed the game pretty well – with nine minutes to go, they were a point up and if Tyrone were coming, they would have to arrive soon or not at all. A brilliant dummy-hop by Tiernan McCann bought him a yard along the endline and his lofted pass to Loughran all but guaranteed a goal. Tyrone were never headed again.

The opening weekend of the Super-8s was a grim, drab affair all around but this game did at least have some specks of light in it. Daniel Flynn cantered through for another goal-of-the-season contender and Conor McManus’s sealing point along the endline late on was worth everybody’s time. Throw is a nervy finish and you had one of the better games of the late part of the championship.

Ruthless Dublin made flesh. Jack McCaffrey’s magnificent fist pass put Niall Scully away in behind the Galway cover. Scully crossed for O’Callaghan to palm home. Galway were doing okay and then they weren’t. Just like that.