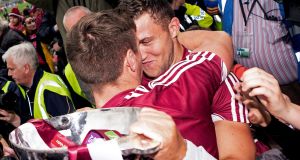 A game of four halves, this. Galway played one half of shackled, stilted packed defence football and only found themselves when they followed it up with a rampant high-pressing game after half-time. Roscommon got themselves to the break a goal ahead by playing with patience, intelligence and accuracy but left all three in the dressing room when they went out for the second half. Both sides left the Hyde with more questions than answers.

For Galway, regaining the Connacht title is a fine day’s work, especially given the manner in which they had to dig it out. Shane Walsh had one of those days where you wonder why anyone ever has to wonder about him. Even in that first half, when Galway were pinned inside their own 45 for long periods marking space, Walsh was the sole player in maroon with any adventure in him. It was only when the rest of his colleagues ventured out to join him after half-time that the Galway tide became irresistible.

“Obviously at half-time, we certainly wouldn’t have been happy,” said Kevin Walsh afterwards. “It wasn’t that we couldn’t get our hands on the ball - there was an awful lot of ball given away, a lot of silly passes, kick-passes, passes in front of the forward but kicked too high, five-yard handpasses given away.

“That’s a lot of turnovers and it put us on the back foot for a lot of that first half. And when you have the breeze at your back, you can’t afford to do that. We got in at half-time and had a stern enough chat and you can’t say anything but good things about the lads in the second half.”

In that first half, Galway were the patient who volunteered for a straight-jacket. You would wonder sometimes at the flagrant self-defeatism that takes hold of teams who become devoted to a rigid defensive system. Galway had a strong wind at their backs, yet instead of attempting to play the game in the Roscommon half, any part of which would provide a feasible shooting opportunity, they persisted with 13 men behind the ball.

For the Rossies, it was a gift. Instead of a backs-to-the-wall job fighting the wind, they were able to mimic Dublin’s gameplan against Tyrone in last year’s All-Ireland semi-final. They shifted the ball around methodically, drawing Galway out bit by bit and coming on the burst to get inside when the chances arose.

Diarmuid Murtagh was dynamite inside, Enda Smith was feeding him tailor-made ball and when Ciaráin Murtagh got in behind Barry McHugh to zip along the endline for the Roscommon goal on 22 minutes, it was no more than they deserved. Indeed, it was no less than Galway deserved too, given their lack of ambition up to that point.

Roscommon went in 1-5 to 0-5 ahead at the break and when Diarmuid Murtagh kicked a free to post the first point of the second half and put them four up, it looked like all the would have to do to see it out was keep working the angles and let the wind do their kicking for them.

But Galway were a different proposition in the second half. Right from the off, they played the game further up the pitch than they had been doing. Whereas they had dug a trench on their own 45 before the break, now they played a line of bodies across the midfield. Walsh generally stayed up front with Damien Comer, and the classy Ian Burke was an outlet as well. Add in a general ramping up of intensity across the board and suddenly Roscommon were playing a new team.

It told on them. Their shooting became so much more erratic than in the first half. Donie Smith, Diarmuid Murtagh, Niall Kilroy and Fintan Cregg all dropped careless wides when another pass would have kept the move going. The subsequent ebb of the Rossie challenge was palpable. A Conor Devaney penalty with eight minutes left on the clock ought to have shocked some life into them but they got no kick from it at all.

“They just drained us,” said Kevin McStay of the missed chances. “Even when we got the penalty you think right here we got but we followed it up with two bungled chances that just didn’t let us build momentum or kick on. If we had got to three or four (ahead) I’ve no doubt we would have really put it up to Galway because they weren’t playing that well. The first half was very flat and was perfection for us, that was exactly what we wanted to do but the second half wasn’t anything near what we had hoped.

“Big scores define the match, our work rate was fine our build-up was decent if a little slow in the second half but the chances were there. We have top forwards and they’ll kill themselves when they look back on it, with wides on the near side and how many into the goalkeepers hands.”

In the end, Roscommon didn’t register a score from play at any stage in the second half. Galway outscored them 0-11 to 1-1 after half-time, with Walsh on fire and an otherwise anonymous Damien Comer bouncing into action to plunder the go-ahead points as the clock ticked 70.