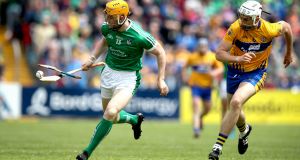 No wonder Clare have been enjoying the restoration of home matches in this year’s Munster championship. They comfortably out-performed Limerick in Cusack Park before a capacity crowd of 18,809 and will contest this year’s Munster final in a repeat of last year’s contest with Cork.

Limerick arrived in Ennis, high on their burgeoning reputation as the coming team this summer, having come through Tipperary, Cork and Waterford unbeaten.

Beware such burdens. It was put to Clare joint-manager Donal Moloney in the wake of his team’s crushing victory in Cusack Park on Sunday that they are now the form team in the championship. He was having none of it.

“Everyone was saying coming in to today that Limerick were the form team in the country. We don’t want to have that!”

Clare were impressive, though. They have a series of scalps that they haven’t boasted in a while in the province. As Moloney also pointed out, three wins in the past and you’d have the Munster Cup on the sideboard. It’s more nuanced these days with the new round-robin format but Sunday in Ennis was effectively an old-style semi-final.

Limerick were on the dreaded third week of their cycle. Apart from Galway, whose final match with Dublin was a dead rubber, no county has won a third successive match this summer.

Signs on. The previously dynamic Limerick side were flat and ponderous in their play from the very start. Shane Dowling missed what may have been the easiest free of his prolific dead-ball career as early as the second minute and they struggled to get into the game.

The home team were impressive, though. They pressed for the whole 70 minutes, causing untold anxieties for the previously capable Limerick defence. Peter Duggan was his usual, robotic self from placed balls - hitting 0-11 without mishap and scoring another couple from play. John Conlon maintained the high-performance levels he has been reaching all championship with another four from play and Tony Kelly emulated him in the second half.

The flashpoint incident just on half an hour that saw a lengthy tribunal of inquiry between referee James Owens and his umpires resulted in two red cards - one obvious one for Tom Condon, on not long as a replacement for Seán Finn and who clearly hit David Reidy and a not so obvious one for Reidy, whose clash with Diarmaid Byrnes triggered the episode.

That reduced cast in the second half appeared to give Clare more room and Kelly in particular thrived but even in the first half he was focused and energetic, hunting down and dispossessing a prominent young pretender Cian Lynch within the first 10 minutes.

Lynch was an example of the problems his team had. He worked really hard but at times too hard and the flow and precision of his A game never came as the match unfolded.

Limerick never got a foothold, falling farther and farther behind as the afternoon progressed: two points by the first quarter became four by half-time, 0-9 to 0-13, and if the third quarter saw no worsening of Limerick’s plight, the final margin of 11 tells its own story. Moloney said that the 14-man game suited them.

“We had more energy than Limerick today. It allowed us to spread the play. We have some magnificent athletes that are just full of running. They covered enormous ground in the second half. It possibly did (benefit Clare). I wouldn’t like to be going down to 14-a-side every day.”

They played Jamie Shanahan as sweeper and he was excellent in a very competent defence that gave their opponents no time or space. That they managed two consecutive scores just four times in the 70 minutes indicates the extent of the Clare backs’ dominance.

Limerick for their part didn’t handle the adjusted numbers as well. Richie English appeared to be the spare man at the back and Richie McCarthy was brought on at half-time for Graham Mulcahy so that the defence wouldn’t be short.

Manager John Kiely said that the third week syndrome might have had an impact but the future weeks rather than the previous would be the immediate focus.

“It is hard. There are learnings there for everybody but we won’t have time to look at those - maybe later on in the winter. Playing that level of sport so intensely over a short period of time, you really would need to be professional. That’s the bottom line.

“I think next year they’re going to be put a gap weekend for everybody. I’m not using it as an excuse - the bottom line is that Clare were better than us today. They had energy all over the pitch and they were so efficient playing against the wind in the second half. It probably suited their style.

“No, we needed something, we needed somebody to bring that bit of energy to it, a bit of a spark and try as they might, we just couldn’t find that and that’s just the way it is and there’s nothing you can do about it.

“I’m sure the boys did everything they could to find that gap. We did lay siege to their goal for a couple of minutes towards the end but ultimately it was just a step too far. Listen, we’ll regroup, we’ll get over it. We’ve a week to take a bit of rest and we’ll come back and we’ll drive on.”

Clare have a collection of All-Ireland medals from 2013 but the county hasn’t won Munster for 20 years. Moloney denied that was a specific motivation.

“It’s not about medals. It’s about performing. I’d say the boys wouldn’t even know where their 2013 All-Ireland medal is. It probably didn’t mean an awful lot then at 19, 20 years of age.

“I think what they would have loved today is the home crowd coming on to the pitch at the end of the game and the satisfaction that they actually performed to their capability. That’s what they’ll take from it.”