Roscommon well capable of springing another ambush on Galway 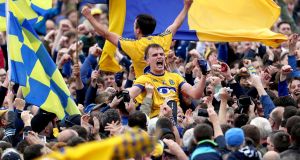 In many ways, Roscommon are better set up for an ambush of Galway in this Connacht final than they were a year ago.

While they won’t exactly be leaping from the bushes to take anyone by surprise in the Hyde tomorrow, they have in their sights a Galway team that is attracting rave notices above and beyond anything seen since the 2000s. By that measure alone, there is more scope for taking Kevin Walsh’s side down a peg or two than there was last July.

This time last year, Galway were a side who’d had a fine league and had beaten a well-warned Mayo in their Connacht opener. That’s pretty much who they are this year too, except this time around they spent the spring in Division One rather than Division Two.

On the back of a decent campaign – albeit one which neither Kerry nor Mayo lost a whole pile of sleep over – they are available at single-figure odds to win the All-Ireland. That makes them a perfectly juicy bone for a neighbourhood underdog to get stuck into.

Into the frame lope the Rossies, who have clearly built themselves a far more solid foundation to this point than they had ahead of the 2017 decider. They were the leading scorers in the Allianz League this year, averaging over 0-19 a game across their eight matches. Yet because they did it in Division Two – and because Galway ran Dublin to four points in the league final – Roscommon are somewhat unregarded here, despite being defending champions playing on their home patch.

“Kevin McStay has pulled rabbits out of hats over the past two years and he’s been able to get his team right in most games, bar the Mayo replay last year. They just met the wrong team that day. Mayo would have wiped the floor with Kerry in the first game if they had beaten Roscommon by a point the first day. They hit a level when it gets to August and September that Roscommon aren’t next nor near. I wouldn’t be so sure that Galway are there either.”

And if they were, it’s an article of faith out west that Roscommon wouldn’t necessarily be cowering in their beds. Even though their respective championship records against Galway and Mayo over the past half-century are generally much of a muchness – 10 wins in 32 games against Galway, nine in 31 against Mayo – the Rossies’ mental block is much more pronounced when faced with the latter than the former.

“If Kevin Walsh really wanted to throw a spanner in the works on Sunday, he’d send his team out in Mayo jerseys!” laughs Hegarty.

Parochial race memory in the GAA carries an outsized weight. The way Roscommon blitzed Galway in the opening quarter-hour of this game last year was surprising but not unthinkable.

They pushed up on Ruairí Lavelle’s kick-outs, pinged points from all angles and Cian Connolly rolled home a classy goal to put them 1-6 to 0-2 ahead with just over 14 minutes gone. It was perfectly conceived and executed and it gave them the confidence to see the rest of the game out, even when Galway had the wind in the second half.

Yet when it came to playing Mayo in Croke Park later in the year, an even better start was just too hot a potato for them to hold onto. They were 2-2 to 0-1 ahead after 12 minutes but not only could they not hold out for the rest of the day, they couldn’t even stave off the next attack, with Lee Keegan cruising forward for Mayo’s goal direct from the kick-out after Roscommon’s second. The monstering Mayo handed down in the replay surprised very few people in Roscommon.

Whereas a pasting tomorrow would genuinely be a shock. The counties have met once already this year, in the delayed FBD League final during the February break in the league. Neither side was at full-strength – Roscommon started seven of the team named McStay has for this one, Galway started six who went on to start against Mayo.

By the end, Roscommon had a decent enough side on the pitch, having adding Diarmuid Murtagh, Cathal Compton and Conor Devanney to the mix – and it was Murtagh who kicked the winning scores to settle a 2-16 to 3-12 game in their favour.

“It was only an FBD final but it was actually a very, very good game,” says Hegarty. “It was played at a really good intensity, which you might not have expected. And with 10 minutes to go, the game was in the balance, and both sides went for it.

“You could see them on both sides thinking, ‘We might have to play these lads in the summer, we better lay down a marker.’ For an FBD game, you could see the Roscommon lads were delighted to win it at the end.”

It’s a blessing and a curse for Roscommon to arrive into a Connacht final without knowing for sure how good they are. The upside was obvious in this game last year – because they didn’t know, Galway had no clue either. The downside is that whatever weaknesses they have won’t be known until they are known, by which time it will be too late.

Certainly the Division Two title they’ve just picked up doesn’t appear to be the most robust version of that competition that has ever been played out. The summer is only a month old and already five Division Two teams have been beaten by eight points or more. Meath went out in the first round of the qualifiers for the first time since 2008. Apart from Cork’s trouncing of Tipperary, every other victory so far by a Division Two team has been against one from Division Four.

Not exactly Hell’s Kitchen, then. The Rossies might suddenly find they were swimming with the tide all this time. If they do, then kicking 0-19 a game will be a distant memory against a team that defends as well as Galway.

But a home crowd in the Hyde, a team unfancied by all outside the county, with plenty of time for McStay and Liam McHale to devise a game plan – throw all those ingredients into the pot and another ambush is entirely feasible.