Donegal saunter past Down who take 25 minutes to score 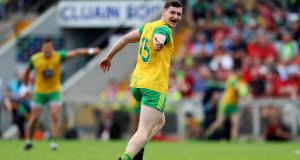 Jamie Brennan celebrates scoring a goal against Down in the Ulster semi-final. Photograph: Inpho

The old Cathedral on the hilltop in Clones was emptying fast long before the final shrill and Rory Gallagher was among those to take leave of his pew in the Gerry Arthur’s Stand.

The Fermanagh manager, a week after his side toppled Monaghan in the first Ulster semi-final, was in to cast an eye over the opponents. Gallagher, like many in the 12,051 attendance at St Tiernach’s Park, wouldn’t have needed to see much more as Donegal cruised past Down and into a final meeting with the man who managed them for the previous three summers.

Twice, Gallagher was inches from delivering an Ulster title as Donegal manager and now he’s the man looking to deny them.

“It makes for an exciting couple of weeks in the build up,” suggested Declan Bonner, Gallagher’s successor in the Donegal hot seat, in reply to the inevitable question when the dust had settled and Gallagher, presumably, was well on his way home and considering his blueprints for their June 24th duel.

“It works both ways and we can only look after our end of it - and that’s basically it. I’m sure Rory will look after his end of it.

“It’s a great place to be, Clones on Ulster final day. That’s where every player wants to be and we’ll be back in two weeks time.”

Donegal had Neil McGee sent off after just 13 minutes, but it hardly mattered as Donegal sauntered their way into the decider.

McGee, just 90 seconds after being yellow carded, was shown a straight red card after a clash with Connaire Harrison close to the sideline. The decision drew considerable anger from Donegal, who had already raced into an early four-point lead.

Bonner suggested that Donegal are likely to appeal: “The allegation is that he put his two knees in, but I didn’t see it to be quite honest so we will just have to wait and see.

“Listen, Neil is an experienced player and is great within the squad. He has achieved so much and it would be a huge disappointment for him to miss out on an Ulster final, but listen, we will look at it, analyse it and take it from there.”

Donegal scored 1-4 after the dismissal of the Gaoth Dobhair man. There was a little good fortune for the goal as Leo McLoone profited when Ciaran Thompson’s shot came down off the upright.

Down were already dizzy and it was the 25th minute before Caolan Mooney raised ironic cheers as he drilled over their first point.

A booming Shaun Patton kick-out that was knocked down by Michael Murphy, well into the Down half, teed Ryan McHugh up for a score. McHugh was buzzing here again. The Kilcar man shipped his fair share of ‘treatment’ from Down, but was excellent throughout for Donegal and a majestic point off the outside of his right boot will open the highlights of the first half. Donegal went in 1-12 to 0-7 in front when they parted ways.

Bonner said: “Sometimes I look at linesmen and they pick up on x, y and z and I’m looking at Michael Murphy and Ryan McHugh being pulled and dragged off the ball and they don’t do anything.

“There were a number of high challenges on Ryan today. He is targeted in every game and he is going to be. It is a concern and he has to be protected.”

Donegal had a whirlwind start to the second half, with Patrick McBrearty scoring twice in a minute before Jamie Brennan tucked in their second goal. Brennan, who scored 1-3 in all, was on the end of a fisted pass by McHugh.

Brennan pointed soon after to open up a 15-point lead.

“At the start of the second half we’d a lot of possession, got nothing off off it and then they got a couple of scores,” Down manager Eamonn Burns reflected.

“The game was starting to move away from us at that stage. When McGee went off, they’re a very experienced side, they know how to play with 14 men. They’re well organised up the field and they leave two men up the field who are very potent so they handled that situation quite well.”

Shaun Patton denied Donal O’Hare with a brilliant reaction save with his foot, but Down got in for a goal with the last play of the game as Niall Donnelly finished.