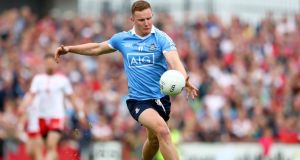 In order to halt Dublin’s pursuit of four in a row and claim Sam Maguire for themselves, Tyrone need to force Dublin to take risks; risks in possession and in shot selection.

So far this summer, in seven Championship matches, no Dublin footballer has taken a shot from play from the opposition 45 metre line or outside of it.
The reigning champions have already scored 15-152 in reaching Sunday’s All-Ireland final, 15-117 of that from play. That’s an average score of 2-17 per match from play.

They’ve also accumulated 48 wides, an average of seven per match.
For all that shooting however, and most of it accurate, Dublin have taken only 40 shots outside of the direct scoring zone. The scoring zone being an imaginary rectangle from the goal line to just beyond the edge of the D, and stretching slightly beyond the width of the D on either side.

A large amount of those shots have still been executed in a dangerous area, either in the pockets of time and space just outside of the 21 and to the left and right of the scoring zone. Or from about 40m out, again with time and down the centre. Dublin footballers do not shoot on sight or take on pot shots from distance or difficult angles.

They have scored exactly 40 per cent of those efforts from outside of the scoring zone, missing 26 and scoring 14. A percentage which a certain man from St Vincent’s might improve were he involved.

Attacker
Six of those shots have come from Ciarán Kilkenny, scoring only one of them. Paul Flynn has three from six efforts. Five were Dean Rock attempts, with the Ballymun attacker scoring three of them. Paul Mannion has scored two from four, young Brian Howard has also scored two and missed two, James McCarthy has scored one and missed two, Niall Scully has missed three. Paddy Andrews and Brian Fenton have both scored one of two, and Eric Lowndes has missed two. Paddy Small and Philly McMahon have both scored one, and Kevin McManamon has missed his one attempt.

Jim Gavin’s Dublin team are playing a minimum risk brand of football, and will hold possession until a high percentage opportunity arises. Against Galway in the All-Ireland semi-final, the ball was in play for just over 39 minutes and Dublin held it for 22 minutes and five seconds of that.

Champions
Against Roscommon in the Super 8s the ball was in play for 40 minutes and 10 seconds, and the champions held it for 21 and a half minutes of that. Against Tyrone they held possession for 24 minutes of 46, and against Donegal they had the ball for all of 29 minutes (63 per cent possession), with the ball being in play for nearly 47 minutes in that Super 8s opener.

They dominated possession in Leinster too, holding it for 21 minutes of the 39 against Wicklow and 23 of the 41 against Laois in the Leinster final. However, they held the ball for a well below average of 18 and a half of the 39 minutes against Longford. The rest was either contestable ball or Longford possession.

Dublin’s average possession count for their seven Championship matches is 55 per cent.

In that encounter against Longford they looked to feed Kilkenny deep inside around the edge of the square with quick deliveries, and the man who usually conducts the flow of possession out the field responded with 0-4. Against Roscommon the possession count was again lower than usual, with Gavin’s team again experimenting, this time with the long high ball into Eoghan O’Gara.

The big full forward was under four long balls and they resulted in three goal chances. Albeit against a physically small Roscommon team, O’Gara won everything that came in and 1-1 came off those four deliveries. He showed his worth as yet another option, but whatever the tactic, Dublin still remain disciplined in their shot selection. That collective focus, patience and awareness separates them from the chasing pack.

In Omagh last month Dublin handpassed 80 per cent of their possession, and on only 19 occasions did a player in a blue jersey take on a Tyrone man ahead of him. Dublin will spread the play from side to side and in and out with quality short passes until they create the pocket of space they need in the scoring zone. And not to be confused with other possession based approaches, Dublin's intent is always to create that space, rather than passing for the sake of retention.

Even on the rare occasion when the possession count is more balanced, Dublin’s opposition this summer have an average wide count of 10. With most of the wides coming at crucial times, before the contest becomes exhibition. The Dubs had less than 50 per cent of the first half possession against Galway but the Tribesmen still trailed after missing goal opportunities and kicking erratic wides. Dublin by and large do not miss those opportunities and if Tyrone get them this weekend they must take them too.

Rattled
The last time Dublin were rattled was in 2014, when they were beaten by Donegal in the All-Ireland semi-final. In that encounter Dublin took on 31 shots and scored less than half of them.

When the pressure is on and the scoring zone is congested, Dublin’s best option is away in the US. Diarmuid Connolly is one of the country’s best long distance point takers, however, the flipside is that Jim Gavin will not want his team to break from their game plan regardless of the pressure they’re under. As they did in that defeat four years ago.

Connolly was the highest shot taker from the two teams in Croke Park that day. He scored only four of his seven attempts and was one of the players taking shots on from distance, particularly in the first half, as Dublin began to crack. So for Plan A to work Dublin may be better off without the 2014 and 2016 All Star, but if Tyrone can get under their skin and things open up they’ll certainly miss a man who carries a massive threat inside and outside the scoring zone.

If Tyrone can eat into Dublin’s possession count and take the chances which will present, Dublin may begin to force the issue. Lads will look to take the game on, and others will panic. Both scenarios deter the game plan. In the Super 8s clash between the counties – the only competitive encounter Dublin have faced this summer – they kicked four balls short. All were from outside of the scoring zone.

So, Tyrone will need to stop Dublin doing what they do at one end, and copy what they do best at the other. As for the champions, they need to stick to their guns. No risk no reward will have little standing in this final.