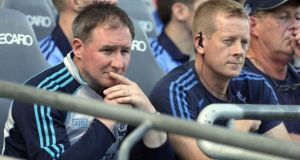 Declan Darcy with Jim Gavin: “You have to evolve because if you stand still, if you look behind for one minute, you will be caught.”

And the Lord turned to Peter and said, “We are all involved absolutely”.

Really, that was Jim Gavin, politely refusing to specify his coaching role in the Dublin set-up, while a seat away Declan Darcy, the legendary Leitrim footballer (really, he was a Dubliner in sheep’s clothing), supplies punchier answers to similar questions.

“It’s still as exciting as ever,” said Darcy in Parnell Park last week.

The younger guys coming in are Brian Howard and Eoin Murchan as Dublin look stronger without Diarmuid Connolly, as they did until this juncture last year when the self-exiled footballing genius was needed when it really mattered to direct Mayo towards their latest tailspin.

Darcy was late to the Dublin jersey having captained his parents’ county to a Connacht title in 1994 before switching allegiance in 1998.

Ever since he has risen in Gavin’s slipstream, receiving the same bad news imparted by Tommy Lyons for ageing players in 2002, to the precipice of six All-Irelands (including 2012 U-21) in seven years as a selector.

Talking of tailspins, under Lyons, the ‘arseboxing’ Mayo and Kilmacud man, both Darcy and Gavin shimmied into the Dublin under-21 management team with an All-Ireland delivered in 2003.

Back then Dublin needed time to grow scoring forwards not named Brogan and plug gaping defensive holes. They needed to win an All-Ireland by whatever means necessary (Pat Gilroy to the rescue) before the thrilling philosophy espoused under Gavin and Darcy was forced into dramatic change after 2014.

“Every year is completely different. Tactically as well, game sense, it evolves big time. Every year there is a huge shift and you have to adjust. Other teams set up differently, new teams arrive, like Galway who came very strongly this year and Monaghan. There are different challenges and it’s as exciting as always.”

The only wonder is if Tyrone can awaken the bored masses by repeating the discombobulation of Kerry in the 2000s. Can Mickey Harte revisit his finest hours by dragging Dublin into a game of football like Mayo did in 2016 and 2017?

“Last year we obviously had a manic battle with Mayo and there was huge learning with that in every way from skill-set to your whole wellbeing. It was a huge challenge for us as a group. That residual learning and toughness, it does add a layer to you. You definitely reset and you go after new challenges. You have to evolve because if you stand still, if you look behind for one minute, you will be caught.”

Dublin have unquestionably changed, but true evolvement needs proving on Sunday. It being the only result that matters, the only game last year that Connolly proved how vital he remained to the cause (even if Howard’s arrival creates a genuine debate over young footballer of the year up against the magnificence of David Clifford).

“It’s huge, every year we have had an injection of players. In fairness to Brian and Con [O’Callaghan] last year, they were there tipping away and you knew that whenever that was happening it was never going to be a shift it was always going to be, if anything, an injection.

“It has been really good, Eoin Murchan as well. All the kids, all the younger players, there are some that you maybe hadn’t seen a whole lot of this year, but they’re doing really, really well within the group. It’s fantastic to watch that. Some haven’t played. Eric Lowndes hasn’t played in the last two games, he’s a fantastic footballer and probably warrants a start possibly, but that’s just the way it has fallen for him unfortunately.”

The attitude of the unselected is strangely silent considering what they have won and who they are and what they are still capable of doing for Dublin.

“It’s not overcomplicated, I don’t think there’s any mad rocket science to this. The simplicity keeps players grounded. It keeps them doing what they want to do and, in fairness to them, they’re no different than any other player in any other county. They want to go out and play with their county jersey on their back and hopefully win a game. Our lads are no different and have just been very lucky the last number of years that it’s gone well for them.”

Gavin leads, despite claiming he merely facilitates, but there is a player-driven core behind this dominant era – there simply has to be, no team can be so robotically accurate without a deep well of character.

“We’re from a different generation of footballers and younger lads, you have to be very conscious that it’s not your way; every group is different in how they’re handled so you have to adapt to what the group wants and then you let it take it’s natural course and give the ownership back to the players – let them take it and drive it.”

Engaging, while revealing next to nothing, Darcy is asked about life along the modern sideline.

“We’re in that place where we need to be very clinical with how we look at the game and we don’t get caught up in the emotion. We just watch it and keep calm, make decisions for the players’ sake – that’s our role.

“If you look at the games this year, Gaelic football probably hasn’t gone to that frantic state too often. There’s been a bit in Mayo maybe, Kerry and Monaghan I suppose, but the hurling has it all this year and we’ve had very little. It’s been very standoffish football this year.”

Darcy maintains the four-in-a-row has not been a huge motivating factor for this squad.

“The group loves being in each other’s company and the camaraderie is underestimated. We enjoy what we do and we’re lucky that we have the players that we have. Jack McCaffrey, sure why wouldn’t you want to go to a match and see him perform, Ciarán Kilkenny, any of the players.