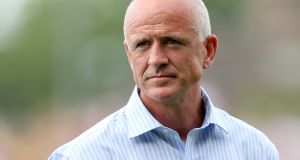 John Maughan will manage the Offaly footballers next year following the resignation of Paul Rouse.

Rouse took over the team during this year’s championship, following the departure of Stephen Wallace after the Leinster preliminary round defeat to Wicklow. The interim manager oversaw a 2-20 to 1-15 qualifier win over Antrim before a two point defeat to Clare.

The appointment means that Maughan will have managed counties in all four provinces.

He brought Clare to only their second ever Munster title in 1992, before bringing his native Mayo to back to back All-Ireland final defeats in 1996 and 1997.

In his second stint in charge he brought Mayo to another All-Ireland final defeat in 2004. He won four Connacht senior titles over the two spells.

Maughan had just one year in charge in Fermanagh, resigning after an Ulster quarter-final defeat to Monaghan in 2001.

He also had a controversial tenure of Roscommon which ended with his resignation in 2008, and he hasn’t managed a county team since then. Roscommon had not won a game in almost 12 months previous.

His former army colleague and the man he replaced as Roscommon manager in 2005, Tommy Carr, is expected to be a part of his backroom team in the Faithful county.

Maughan - a former Mayo defender who was only 30 when he led Clare to Munster glory 26 years ago - was recommended by a committee comprising of Tommy Byrne, Pauric Pierce, Vinny Claffey and Eddie Fleming.

Offaly will compete in Division Three of the league early next year, after two wins and a draw in their final three games seen them narrowly escape relegation earlier this year.