‘Tyrone will be 100 per cent convinced they can beat Dublin’ 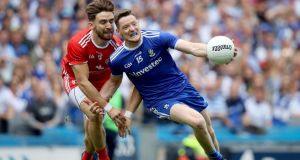 Open and attack-minded. Extreme and unyielding. Farcical and even notorious.

Everyone has their own thoughts on what kind of All-Ireland football final Dublin and Tyrone will present on Sunday; only Conor McManus is uniquely positioned to offer his.

Still fresh in his thoughts, for starters, is Monaghan’s All-Ireland semi-final defeat to Tyrone, by a single point, having already beaten them in the Ulster quarter-final. Monaghan are also the last team to beat Dublin in league or championships since April 2017, thanks to their one-point win in the last round of this year’s league back in March.

In some ways his thoughts are mixed. McManus feels they had Tyrone for the taking in what was Monaghan’s first semi-final since 1988, only for Tyrone’s oak barrel experience to help them through. Still, his abiding thoughts from that game is the All-Ireland final would be there for their taking too.

“I’ll put it to you like this, if we were in the final, we wouldn’t be thinking any different,” he says. “Tyrone are after beating us, and will be going into this game 100 per cent convinced they can win the All-Ireland. There’s no doubt about that.

“Now whether everyone else in the country believes that, number one, that’s irrelevant to them. And, number two, they’ll not really care either.

“They will feel that in a one-off game they can beat Dublin in an All-Ireland final. It’s probably up to Dublin then what they bring to the party. They maybe haven’t been going as well as they have been in other years. But again that’s probably the danger, that if they do catch fire they’ll be hard to beat.”

With his championship tally of 2-47, from nine games, McManus is the top scorer this summer, and also collected the GAA/GPA Footballer of the Month for August. Given his belief in Tyrone, the next question is how exactly they might go about beating Dublin – or rather, what tactics might Monaghan apply if they were playing Dublin on Sunday?

“Tyrone are going to have to stop Dublin getting off to a quick start. If you’re playing catch-up with Dublin in Croke Park for 60 minutes, it’s a long, long day. I think first and foremost they’re going to have to make it competitive to half-time. And whatever they spring after that, be it subs or whatever bit of an approach they take, they’re definitely going to have to keep things tight in the first half, not let the game away from them.

“They’ll not need anybody to tell them that. They played Dublin in the semi-final last year and the game was over at half-time, so they’ll know that themselves.”

Monaghan’s experience of playing Dublin in the 2014 All-Ireland quarter-final has echoes of that, as the sides were relatively even for the first 20 minutes, before Dublin kicked on to win 2-22 to 0-11. For McManus, this is a different sort of Dublin machine.

“And I know they did that last year against Tyrone in the semi-final, but this year in particular they don’t seem to be really going after teams as much as maybe they were. It seems to be nearly more methodical than it had been with Dublin in the past.

“But you get the feeling that they haven’t been just firing on all cylinders yet. Like, they played Galway in the semi-final and for long periods of that game it looked as if they were just stuttering for a while. But then in the second half the game opened up and they can spring lads from the bench that really make an impact. They’re just so comfortable in the way they’re playing and the way their system is. It’s nearly in the knowledge that they know they’re going to get chances.”

Monaghan’s league win over Dublin this year comes with one obvious caveat: Dublin were already through to the league final, and were simply playing housekeeping. What Monaghan brought to Croke Park that day was a fearlessness that Tyrone will need to replicate.

“You can’t play with any fear against Dublin, because if you do that they’ll swarm all over you. You just really have to make it competitive for them throughout the whole game, and not sit back and make it easy for them. We didn’t treat it as a dead rubber and I don’t feel Dublin treated it as a dead rubber when you seen the game going to a point, whatever it was towards the end.

“If Dublin have possession for long periods of time, they can make it a very long day in Croke Park, which we’ve had before. Whereas if you put them under pressure and take the game to them and try and put them on the back foot and not let them set the terms of engagement, then it’s a different game. I think that will be one thing Tyrone will be focused on.”

Two names then surface: Ciarán Kilkenny and Stephen Cluxton. Kilkenny has scored 2-12 from play this summer, and if Tyrone are to win on Sunday then his runabout will have to be curtailed; so, too, the influence of Cluxton’s kick-outs.

“I don’t think you can afford to give Dublin kick-outs for 70 minutes. They will just come at you wave after wave. They are so comfortable in possession. Against ourselves and against Tyrone, they will keep the ball, not take it into trouble and the next thing, they are popping the ball over from 25 or 30 yards.

“If you give Dublin possession, and they are going to squeeze you for possession on your kick-outs, they could end up having 70 per cent, 80 per cent of possession and you don’t have a chance. You have to try and squeeze them as best you can. So, it takes a lot of thinking as well. It’s a mental game as well as just a physical thing, because you have to be all the time thinking and all the time trying to plot your way through the game.

“Ciarán Kilkenny had the run of the field in the previous game against Tyrone, and caused a lot of harm. When you are defending someone like that, it’s very much you and him, particularly when he is out around the half forward line

All of which sounds somewhere between the open and the notorious.