Horror-show in All-Ireland final could have serious repercussions

Ciarán Murphy: Any rule changes can’t be as a direct result of Dublin’s dominance 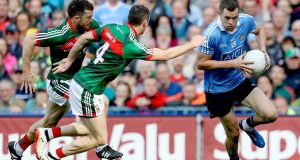 Mayo’s Keith Higgins closes in on Dublin’s Dean Rock during last year’s final. Tyrone don’t have the faith that Mayo had last year in their defenders, because they don’t have that calibre of player. Photograph: Tommy Dickson/Inpho

This week I sat down to watch the 2017 All-Ireland football final. Primarily it was to see if there was anything in Mayo’s performance that could give Tyrone hope, since that game was the last time Dublin have been even remotely troubled by anyone.

But there was also a nagging feeling that a game as good as that one might be a reminder that possible rule changes that have been mooted recently might not be necessary, if the rules as they currently existed facilitated the entertainment we saw last September.

Eighty breathless minutes later (and there were moments in the game that still cause you to catch your breath, 11½ months later), I was unconvinced on both counts.

No losing team has ever scored more in an All-Ireland final than Mayo did last year. Only Galway in 1973 equalled their tally of 19 points (1-16 for Mayo last year, 2-13 for Galway 45 years ago), and that was in an 80-minute final. There can be little doubt that it was the best losing performance in recent memory, and perhaps ever. And yet still they lost. Dublin still found a way to win.

Talking to Séamus O’Shea on Monday morning, before the roof fell in on Mayo’s winter again, he pinpointed one area which summed up for him why Mayo can discommode Dublin in a way that no other team can.

They have defenders good enough to mark Dublin man-to-man. They have so much faith in the ability of their backline that they don’t feel the need to flood their own 45 with players. That faith was repaid time and time again last year.

But it’s more than that.

In the 13th minute of last year’s final, James McCarthy is soloing down the heart of the Mayo defence. We know how this plays out. He’ll carry it until he has to either kick a point himself under no pressure, or fist-pass it into Paddy Andrews who is running out to meet him, and Dean Rock will run on the diagonal to take the pass from Andrews, and from 25 yards out it’s a simple clipped point.

But that’s not what happens. Tom Parsons chases McCarthy for 50 yards, then he runs him down, and he dispossesses him. Keith Higgins picks up the pieces, runs the ball back 70 yards, passes it to Kevin McLoughlin, and McLoughlin kicks a point from 35 yards out. It’s what the game is all about – who needs a rule change?

Do Tyrone have the mindset to go toe-to-toe with Dublin in that cussed way that Mayo did? That’s the great unanswerable. Watching how well Mayo played last year, pretty much across the board, only to still be defeated at the end, sums up the scale of the job facing Tyrone. Tipping them requires you to suspend critical thinking.

For now, it’s Dublin’s world and we just live in it. The winners set the template, and the others will copy. It’s inevitable that three-in-a-row winners will drive whatever changes are going on in the game. But the approach to any mooted rule changes can’t be as a direct result of Dublin’s dominance.

At Congress last year, the amendment which means all kick-outs must go beyond the 20-metre line was seen by Dublin as a shot across their bows. If that was a rule designed to curb Stephen Cluxton’s influence, then is a ‘back-court’ rule (as Jim McGuinness suggested in these pages on Tuesday – if you enter the opponent’s 65, you can’t come back out again without taking a shot or being turned over) effectively a nod to Ciarán Kilkenny?

Ten or 15 years ago, even the smallest rule changes were set upon by inter-county managers – reports from Dr McKenna Cup games would be 150 words on the game, and 450 words on the outrage of Mickey Harte or Joe Kernan at some trifling experiment in the rule book.

It’s safe to say that the mood has changed. Now we’re like the patient who has exhausted all of modern medical practice looking for a cure and is willing to give homeopathy, hypnosis, leeches . . . anything, a go.

That’s actually a pretty good situation for the people charged with changing the game to be in. What might just further help their cause is an All-Ireland final this weekend that encapsulates all that’s wrong with the game currently.

And that’s the impact of an All-Ireland final – last year’s classic might have convinced us there’s not much wrong with the game when it’s played right, against our better judgement. A horror-show this weekend could be the catalyst for all sorts of changes.