This year’s hurling and football inductees have been announced 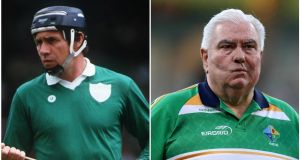 Leonard Enright (left) and Joe Kernan (right) have been inducted into the GAA Hall of Fame.

This year’s football induction to the GAA Hall of Fame is Armagh’s Joe Kernan (64), one of the best known and most influential people in the game. As a player he was part of the Armagh team that reached the 1977 All-Ireland final where they lost to Dublin in a high scoring match in which Kernan hit 2-1.

A bustling, powerful player on the ball, he won All Stars that year, at centrefield, and in 1982 at centre forward, both years also winning Ulster medals with Armagh as well as in 1980.

It was as a coach that he became again prominent, leading his club Crossmaglen Rangers to three All-Ireland titles in four years, 1997, ‘99 and 2000 – in the process laying the foundations for a dynasty in the south Armagh club, which has gone on to win further All-Irelands in 2007, 2011 and ‘12.

His accession to the management of the county was considered inevitable and he took up the reins from Brian Canavan and Brian McAlinden in late 2001. The following year, Kernan led the county, under the captaincy of Kieran McGeeney, to an Ulster title and a first All-Ireland, beating Kerry in the memorable 2002 final.

They were back a year later but lost to Tyrone in the first All-Ireland football final between two counties from the same province. After finishing up with Armagh, he also managed Galway for a year.

Kernan also coached Ulster to the Railway Cup, having taken over the role from Brian McEniff in 2008.

In 2015 he was appointed coach of the Ireland international rules side and won that year’s one-test series, played in Croke Park. Last year with the contest restored to two tests, in Perth and Adelaide, Ireland were beaten in a competitive series.

The latest hurling induction was honoured in 2013 in a selection of the best players from the 1980s not to win All-Ireland medals. Leonard Enright (65) came into the Limerick team at full back just after Pat Hartigan, who had won five successive All Stars in the 1970s.

He had also been a member of the county panel, which won the 1973 All-Ireland, the last time Limerick lifted the Liam MacCarthy until earlier this month.

Enright did so well that he in turn dominated the number three jersey on the All Stars in the early 1980s, winning the award in 1980, ‘81 and ‘83. In Brendan Fullam’s book Hurling Giants, Enright recalled the 1980s Munster final as a career highlight.

Limerick won the title and in doing so, prevented Cork from doing a provincial six-in-a-row. Enright was a traditional full back, strong and direct but also a fine hurler.

In later life he was involved in the development of hurling in Mary Immaculate College of Education, now one of the game’s third-level strongholds. He became a county councillor between 1999 and 2009.

The medals, jerseys and other sporting memorabilia belonging to the new inductees are now on display in the GAA Museum’s Hall of Fame. This permanent exhibition is one of the museum’s most popular attractions and also includes match footage featuring all 48 inductees and narrated by Mícheál Ó Muircheartaigh.

“Former players have a special place in the history of the GAA and nowhere is this captured better than in the GAA Museum where their achievements are highlighted and revered. I am delighted to welcome these two outstanding GAA ambassadors into our GAA Museum Hall of Fame.

“Both of these individuals illuminated their respective codes, setting consistently high standards that thrilled crowds and have left an enduring legacy on our Games”.

“I congratulate Leonard and Joe and I hope this acknowledgement helps shine a light on their efforts over many years to generations who were not lucky enough to witness first-hand the skills they brought to bear on the game.”

Niamh McCoy, Director of the GAA Museum, which celebrates its 20th anniversary this year added: “The GAA Museum Hall of Fame serves as a permanent reminder to the greatness of the players who adorned our game at the highest level. It is important that these players are remembered not only by those who were lucky enough to see them, but crucially by those who did not have that privilege.”

The museum houses a vast collection tracing the birth and growth of Gaelic games and is the starting point for the Croke Park Stadium Tour and Ericsson Skyline Tour.