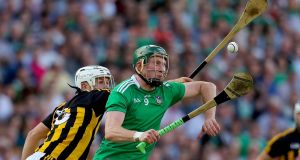 William O’Donoghue: “We were beaten in that semi-final by a Kilkenny team who are incredibly talented, have one of the best managers of all time, and had a fantastic work rate.” Photograph: Oisín Keniry/Inpho

Don’t look back. As a measure of 2019 success, league and Munster titles certainly stack up only deep down Will O’Donoghue knows what else Limerick hurling will be remembered for – on and off the field.

Which is why O’Donoghue sounds so keen to move on, beginning with Saturday’s opening round of the Allianz Hurling League – and Munster final rematch – against All-Ireland champions Tipperary (Semple Stadium, 5.15pm).

Limerick may have recorded a memorable 12-point win over Tipperary in that last meeting, only to ultimately surrender their All-Ireland title in the semi-final against Kilkenny – a game also remembered for the late equalising chance that never was, Darragh O’Donovan’s shot waved wide instead of being awarded as a 65-metre free. Kilkenny won by a point.

“People talk about that semi-final as if we were robbed,” says O’Donoghue, who also ended 2019 with an All Star nomination at midfield.

“We were beaten in that semi-final by a Kilkenny team who are incredibly talented, have one of the best managers of all time, and had a fantastic work rate.

“Kilkenny probably don’t get enough credit for their performance that day, people are acting as if we just didn’t turn up, or didn’t want it. And Kilkenny happen to take it. But look at those first 15 minutes, look at their tackle count, their work rate; they were 1-8 to 0-2 up because they deserved to be.

Still, the video evidence clearly pointed to the 65-metre free that wasn’t awarded: “You can say that but we probably had 16 wides, if we score four of them no one really cares if that line ball goes wide or not. It’s probably one for supporters or someone else to complain about but when you are out there and you have 70 minutes to put in tackles, scores, blocks and hooks you cannot blame it all on one moment. I would actually be quite disappointed if our dressing room would put an All Ireland semi-final loss down to that.”

In the meantime, the Limerick County Board have drafted a motion calling for (whisper it) some sort of Video Referee Assistance (Var) in hurling: O’Donogue gives his reasoned support.

“I think video technology could do with being introduced in terms of how fast the game is. But then people were screaming for it for years in English soccer and now they are screaming for it to get out. So sometimes you have to be careful what you wish for, but sometimes I do think refs could be helped for their own benefit. Not because they are not capable but because there is so much to see. Maybe it is a motion to find out how they could be helped.

“When you look there are obviously incidents that can alter the direction of the game, in terms of a sending off that could be misread by a ref in real time. Something like that that could be a worthy challenge.

Later, in November, the Limerick County Board confirmed that two players were sent home early following an incident in New York after the Hurling Classic, stating: “Limerick GAA expects the highest standards of behaviour and example from its players, both on and off the field, and will not tolerate any breach of those standards. A disciplinary process has commenced and there will be no further comment in relation to this matter.”

O’Donoghue sounds equally keen to move on from that controversy.

“I suppose we have to understand that a lot of what is said in the papers and stuff like that; they are commercial entities and if there’s a story there to be written they are going to write it and it’s going to go to print.

“Some of that stuff can be taken out of context or what not, but I’m sure if you were to speak to a lot of people in Limerick there’s a lot of good being done by the representatives of Limerick GAA.

“We are all just looking to improve and maintain that integrity that we have and give back to the people of Limerick and just let our hurling do the talking.”