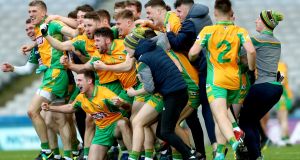 The GAA is hopeful that Sunday’s AIB All-Ireland club finals will attract a crowd of 20,000 to Croke Park. This year’s championship finale is the first to be moved from the traditional St Patrick’s Day slot – as part of the ongoing attempts to rationalise the fixtures calendar.

The change of date has prompted speculation that attendance figures will be hit. Fergal McGill, the GAA’s Head of Games Administration, is more sanguine although he accepts that there may well be an impact from the bringing forward of the finals.

“I don’t think so. There’s bound to be a knock-on effect on the crowd because St Patrick’s Day is a national holiday but we’re confident that there’ll be 20,000 in attendance. It could be a positive, as from next week the media focus will be very much on the county game when the Allianz leagues begin.”

Club finals haven’t been as well attended in more recent years, with 17,819 present for last season’s double bill of Corofin-Dr Crokes and Ballyhale-St Thomas’ whereas just 15,000 braved the Arctic weather of 2018 for Cuala-Na Piarsaigh and Corofin-Nemo Rangers – on the same afternoon as Ireland’s Grand Slam match in Twickenham.

The record attendance is 40,106, 21 years ago when Crossmaglen overcame Ballina and Doora-Barefield beat Rathnure. The average for the past two decades is around 27,500.

Crowds are dependent on the catchment of competing clubs and this weekend, McGill says, they are from small parishes.

“We haven’t been overly lucky with the finalists. They’re all great clubs but between the four of them, there would be a total population of about 9,000. We’re expecting to attract about double that, which isn’t bad.

“I accept that the walk-up crowd mightn’t be as big because the Patrick’s Day final became a routine for many people, particularly those living in Dublin.”

The hurling sees a first Kilkenny-Tipperary club final with champions Ballyhale meeting Borris-Ileigh whereas Corofin can make history in football by becoming the first club to win three-in-a-row. Their opponents are first-time finalists Kilcoo from Down.

The weekend gets under way on Saturday with the intermediate and junior club finals, which are a Kilkenny-Cork preserve. The intermediate decider sees the multi-decorated former Kilkenny hurler Tommy Walsh seeking a first club All-Ireland with Tullaroan, against Fr O’Neill’s whereas in the junior Conahy Shamrocks take on Russell Rovers.

1 Avoid the treadmill at all costs – marathon training in the 2km radius
2 Sonia O’Sullivan: Taming The Tan gave us one last roll of the dice before shutdown
3 Rich Premier League clubs way off the mark in cutting staff pay
4 ‘NRL Island’ being considered in Australia to continue season
5 My favourite sporting moment: When Sea The Stars showed us what perfection looks like
Real news has value SUBSCRIBE