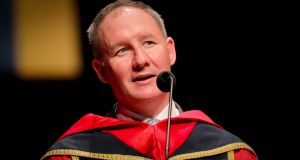 Jim Gavin after receiving an honorary doctorate from DCU in December. Photograph: Inpho

Former Dublin football manager Jim Gavin is to be granted the Freedom of the City by Dublin city council this weekend.

Lord mayor of Dublin, Paul Mc Auliffe will confer the honorary Freedom of the City of Dublin on the five-in-a-row All-Ireland winning football manager, who has since stepped down from the role (replaced by Dessie Farrell).

The ceremony will take place in the round room of the Mansion House, Dawson Street, on Saturday evening at 7pm. A number of the Dublin players and Gavin’s management team are expected to be in attendance

In a statement released on Wednesday morning, Dublin city council explained they “are paying tribute to Jim Gavin for his contribution to public life and service to his county and country both on and off the pitch.”

Gavin led Dublin to the 2013 All-Ireland in his first season at the helm, before lifting Sam Maguire in five of the next six years.

Those six All-Irelands are added to the five National league titles and seven Leinster Championship titles which Dublin have won during Gavin’s seven-year reign and he leaves the county unbeaten in 37 championship matches.

The 48 year-old former All-Ireland winner as a player (Dublin, 1995), is the assistant director of the Irish Aviation Authority. He previously worked as a pilot for the Irish Defence Forces. He also served with the United Nations as chief of the military aviation while based in Chad.

Gavin is originally from the Clonburris area of Clondalkin in west Dublin, and played for the Round Towers club.