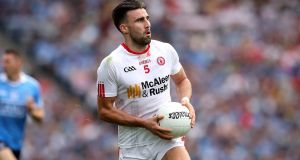 Tiernan McCann: “Next week is going to be a different ball game altogether. So we are going to have to refocus. And it is going to take a massive effort.” Photograph: Ryan Byrne/Inpho

It isn’t all full houses in Clones and sweltering afternoons. Tyrone opened their league campaign in a distinctly wintry Tuam on Sunday and were handed a loss for their efforts. It was the typical stuff of January: part football match and part tug-o’-war.

If the paying customers were still trying to get their heads around the novelty of league football at this time of year, it seemed as if the Ulster men were too. They couldn’t get motoring in the first quarter and in the end, Tyrone paid for their sluggish start.

Damien Comer had rattled them for 1-1 before they responded and when the final whistle came some 42 minutes into a slog of a second half, that was the difference between the sides.

So when Tiernan McCann emerged from the retro’ Tuam changing facilities, it was still spitting rain and starting to get dark. This was about as anti-glamour as the lot of the inter-county footballer gets. Welcome to the league. He managed a grin when asked if he relished football at this time of year.

“Not particularly but that is the climate we live in. We don’t have fantastic weather at this time of year but it’s the same for both teams out there. It’s the same across the board.”

The restructured league is a treat for football fans; the games come thick and fans and the Division One league programme contains a succession of attractive games. For the actual competitors, the pace is going to take some getting used to.

“We will have to wait and see because it is unknown territory for us week after week and we have a McKenna Cup final to come as well,” McCann said.

“We will use our squad as best we can and try and recover as best we can week on week. It is a learning process I suppose. We just have to try and pick up momentum and points.”

The Kiltyclogher man has quickly moved from one of the new faces in Mickey Harte’s changing Tyrone side to a central figure. Nominally a wing back, he was switched into full back for a time on Sunday to keep track on Adrian Varley and after half-time was repositioned on the wing from where he revitalised the visitors with a series of those late, immaculately-timed runs.

The Tyrone system has its shares of critics but it requires patience and intricate ball handling and clever running. It’s a game at which McCann excels and one that is not best executed in the dog days of January.

Tyrone lost Darren McCurry to an early red card but it was the concession of that goal, after just 20 seconds, which irritated McCann. In last August’s All-Ireland semi-final, Tyrone paid dearly for letting Con O’Callaghan in for a quick goal for Dublin. It is not a habit they want to develop.

“We are going to learn from these giving away goals in the first five or ten minutes. We didn’t make much use of the breeze that we had. Maybe people in the stand didn’t see it but it was a really tough breeze. The ground underfoot was poor so it was important to keep the ball and to finish it when you get the chance.

“So it was going to be an uphill battle, never mind with 14 men. I think we have to give Galway credit too because they came out with this energy at the start and were pacy and direct up front and were able to get good ball in. Especially in the first 35 minutes and then in the second half they absorbed the pressure really well and were able to hit us on the break.”

On RTÉ’s highlights programme, Tyrone’s return of three points from play was used as further evidence of a need to inject more momentum into their attack. But Tyrone had chances, firing eight wides that were all reasonable scoring chances. If there was a central attacking difference, it was that Galway worked the ball into slight better positions before taking on the shot.

It was when Tyrone started scything through the maroon defence at speed that they made inroads, forcing a series of frees which brought them to within two points in the last ten minutes of the match. Nothing had gone right yet they looked like they might get something from the day.

“We did at that stage. Yeah. We were probing well and keeping the ball out of contact as best we could and trying to create openings. We won a couple of frees and maybe they were just about not scorable. We had to play them short. And then they picked us off on the counterattack and it was unfortunate.”

Next Saturday night sees two of the banner nights of the spring season. Kerry visit Mayo to renew acquaintances on the back of last summer’s riveting semi-final series. And All-Ireland champions Dublin visit Omagh after opening their league season with an imperious performance against Kildare. It’s hardly an easy assignment for Tyrone and memories of that semi-final will still be relatively fresh among their vocal home support.

“Absolutely. Notoriously, we tend to start the league quite well and then maybe fade away towards the end. Now we have to come at it from a different perspective. And next week is going to be a different ball game altogether. So we are going to have to refocus. And it is going to take a massive effort.”